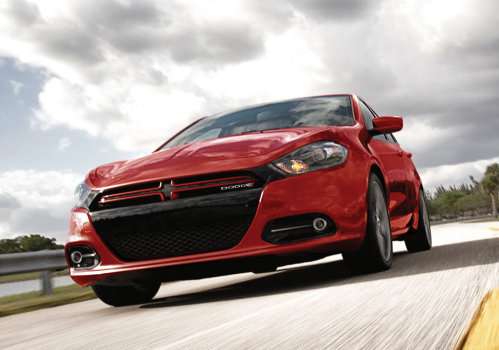 The 2013 Dodge Dart can now add the NHTSA’s 5-Star Safety Rating to its many accolades from sources ranging from Kelley Blue Book, Autoweek, AutoTrader.com and the Washington Post to the Texas Auto Writers Assn.
Advertisement

The most advanced compact car to ever brandish the Dodge cross grille and nameplate recorded 5-star results in overall frontal and side-impact crash tests for an combined 5-Star score.

"The 5-star safety rating is further evidence that the all-new Dodge Dart is much more than a stylish, fun-to-drive vehicle," says Reid Bigland, Dodge President and CEO and Chrysler Group's Head of U.S. Sales. "The Dart represents genuine value, which we at Chrysler recognize is a precious commodity to consumers."

The Dodge Dart features 10 standard-equipment air bags and one of the auto industry's highest content-ratios of high-strength steel, helping to create a more rigid and thus safer passenger cabin.

The 2013 Dodge Dart also received a 2012 Top Safety Pick award from the Insurance Institute for Highway Safety, achieving the highest rating possible in each of the four trials used in the IIHS evaluation of occupant safety. That is what the agency looks for in the 2012 Top Safety Pick – the organization's highest safety honor

As the very first product born of the Chrysler Group’s alliance with Fiat S.p.A, the Dart was engineered with more than 60 safety and security features, to give the driver and passengers of the compact car greater peace of mind.

The Dart’s safety strategy begins with a solid foundation consisting of high-strength-steel comprising 68 percent of the Dart's body, one of the highest ratios in the industry.

Every Dodge Dart also is equipped with dual-stage, adaptive, venting air bags for both front-seats, with corresponding pelvic and thorax safety cushions. The front seats also feature knee air bags. Rear passengers are protected by rear-seat-mounted torso air bags as well as curtain air cushions that protect both front and rear passengers on either side of the car.

Finding such safety features in a luxury flagship is one thing, but having them in a compact car built by Dodge deserves a tip of the hat! You go, Dodge Boys!

Elon Makes a Cybertruck Statement With an Action, But Quiet in Words
Tesla's Record Month in China: Doubled Registrations in March 2021
END_OF_DOCUMENT_TOKEN_TO_BE_REPLACED