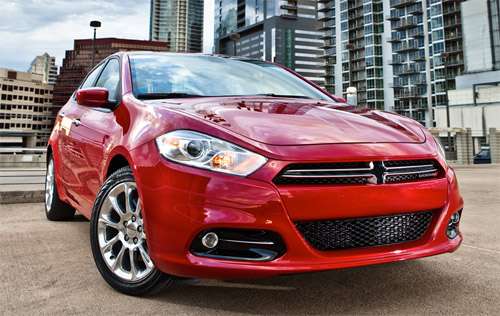 An impressive achievement for a relatively new compact car, the 2013 Dodge Dart has aced each and every IIHS test for impact safety, including the new moderate-overlap frontal-impact rating, becoming the 12th vehicle from the Chrysler Group to be so named.
Advertisement

Based on a close-up look at the Dart during recent automotive events, it truly appeared Dodge had hit the sweet spot on the new small car. After a quick look at the engine and interior, we noted the refined fit and finish while listening to some of the car's virtues, pointed out by the brand reps in attendance. It is good to hear the IIHS has confirmed its safety.

"We had high expectations for the Dart and our engineers delivered," says Reid Bigland, Dodge-brand President and CEO and Head of U.S. Sales. "Since its launch, the 2013 Dodge Dart has consistently outperformed in the area of fuel efficiency, technology, value for the money and now safety. It is truly a groundbreaking new car."

Though the 2013 Dodge Dart claims a total of 60 different safety and security features, a lot of the IIHS designation was a likely result of two specific features. It comes with 10 airbags standard and has a passenger compartment surrounded by high-strength steel – a full 68 percent of the body structure making it the highest in the industry.

The Top Safety Pick is the highest safety rating bestowed by the IIHS.

At present, the IIHS requires certain modern technology systems to be present for any vehicle to receive Top Safety Pick status. These include electronic traction and stability control systems.

Among numerous other awards and accolades the 2013 Dodge Dart has been named the Compact Car of Texas by the Texas Auto Writers Assn, on of the 10 Coolest Cars Under $18,000 by Kbb.com and Consumer Guide Automotive and to the Most Important New Cars for 2013 List by the Washington Post.

We’ve already missed one opportunity to drive Dodge’s new compact marvel during the 2012 RMDE and will not let such a chance get away again. As a long time admirer of small cars with spirited performance, the 2013 Dodge Dart seems to promise not only reliable, economical transportation, but a whole lot of driving fun to boot.

Not only that, it looks darn good in red and black. How did Richard Thompson put it? “Red and Black leather, my favorite color scheme,” his original composition 1952 Vincent Black Lightning intoned.

In the song, our protagonist is dying and bequeathing his Vincent motorcycle to his redheaded girlfriend. We’d be delighted if someone, involving considerably less drama, would just loan us a Dart to drive for a while. That’s the only way to ever know if it’s as much fun to drive as it looks.

Tesla Contemplates A New Strategy for China Retail even As Sales Boom
Jay Leno on Elon Musk & EVs: “I Think He Should Get ... Credit"
END_OF_DOCUMENT_TOKEN_TO_BE_REPLACED