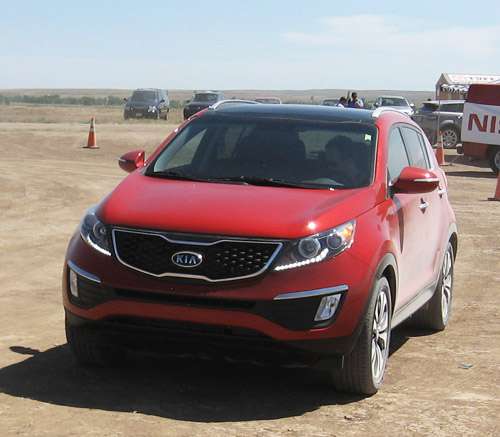 The 2012 Kia Sportage has been named to Top Cars for Teens by the Automobile Association of America. The Sportage was picked for laudable dynamics, dependability, value and a long list of standard safety features, plus top performance in the NHTSA crash tests.
Advertisement

In trials at the Colorado Off Road Extreme rally during the Third Annual RMDE last week, the Compact Utility Vehicle showed excellent stability and traction on a 2-mile offroad course across a convoluted section of terrain. The AAA rating is based on those same performance capabilities when recommend for teen drivers.

"We are honored that AAA, one of the most respected authorities on travel and transportation, is recognizing the Kia Sportage as a top car for teenage drivers," said Michael Sprague, executive vice president, marketing & communications, Kia Motors America (KMA).

"Knowing that the Sportage, our longest-running nameplate, has been chosen not only for its attractive design that appeals to all ages, but more importantly, for its safety features, reliability and value, is evidence that consumers do not have to sacrifice curb appeal for dependability."

Indeed, in naming the Sportage to their Top Cars for Teens list, AAA states, “The list focuses on vehicles that appease both parents and teens by combining attractive looks and performance with reliability, safety and a budget-friendly price.”

AAA Auto Buying analysts test-drive and evaluate hundreds of vehicles each year in the process of compiling various reports and lists. The 2012 Sportage was also awarded an overall Five Star safety rating from the NHTSA.

In addition, during the NHTSA dynamic maneuvers to test vehicle resistance to untripped rollovers, the 2012 Kia Sportage was among the group of vehicles whose wheels did not tip up earning a coveted "no tip" designation.

Growing by leaps and bounds
Kia Motors has become one of the world's fastest growing automotive brands in the world. Since 2009, Kia has launched more new vehicles in the U.S. than any other automaker, earning a reputation as an industry styling leader under the oversight of chief design officer Peter Schreyer.

Kia Motors America's line of efficient, fun vehicles has raised the brand’s public image and dramatically increased consumer awareness. In 2011, the company marked its 17th consecutive year of market growth, thanks to a quantum leap in perceived quality, according to Experian, and the industry's highest brand loyalty ranking from 2007 to 2012.

Kia's lineup also includes the Sportage, the popular hamster-hawked Soul, the surprising Optima Hybrid, the compact Forte sedan and hatchback, the sub-compact Rio and its 5-door version, plus the Sedona minivan.

Other vehicles picked by AAA for Top Cars for Teens included the VWGolf/Rabbit TDI, Ford Focus, Honda Civic, Hyundai Sonata and Ford Fusion. Notably the newer models of the Ford Focus and/or Fusion have the MyTouch system, which allows a parent or guardian to limit speed, radio volume and prevent safety systems from being turned off.

“Parents and teens seeing eye to eye on a vehicle can be tough,” said Don Nunnari, vice president of automotive services for AAA Arizona. “However, there are a variety of safe, reliable and stylish vehicles on the market that will fit into the budget, thereby satisfying parent needs and teen wants.”

LG's New EV Battery Plant Is a Welcome News for Tesla
Tesla Giga Berlin's New Hurdle: It's Not Only the Gov't, but Now Tesla Itself
END_OF_DOCUMENT_TOKEN_TO_BE_REPLACED