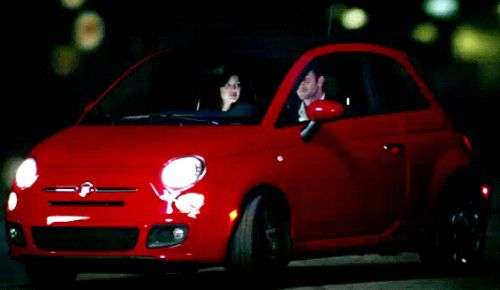 2012 Fiat 500 Cabrio to be featured in Jennifer Lopez video

Not only will the 2012 Fiat 500 Cabrio be featured in the new Jennifer Lopez video, Papi, but a 30-second trailer for the video will highlight the Fiat 500 Cabrio this evening during Monday Night Football on ESPN.
Advertisement

FIAT announced today the collaboration with actress, entertainer, philanthropist and entrepreneur Jennifer Lopez. The first element of the relationship will debut today around the world, with the placement of the all-new 2012 Fiat 500 Cabrio in Lopez’s new music video, Papi, the latest single from the star’s new album, Love? on the Island Def Jam label.

A 30-second trailer of the video with J. Lo and the 2012 Fiat 500 Cabrio, will also debut during Monday Night Football on ESPN. As part of the deal, Lopez will appear in commercials for the 2012 Fiat 500, scheduled to debut later this year.

“Like the FIAT consumer, Jennifer Lopez sees the world as her canvas and is not afraid to express herself; she is continuously drawn to projects that are authentic and real,” said Olivier Francois, Chief Marketing Officer, Chrysler Group LLC. “Jennifer fits perfectly with the brand not because of who she is but because of what she is – authentic, passionate, modern and a fighter determined to stand out from the rest. As you look at her career path, she embodies the FIAT philosophy, ‘Life is Best When Driven.’”

Paul Hunter directed Lopez’s music video for her new single, Papi, which not only features the all-new 2012 Fiat 500 Cabrio but does it prominently. Shot in cinematic style befitting the svelte Italian vehicle, the music video will be seen in a 30-second trailer during the airing of Monday Night Football on the ESPN network tonight.

Jennifer Lopez, as an actress, entertainer, music artist, film, TV & music producer, fashion designer, entrepreneur and humanitarian, is one of the most powerful and celebrated personalities in entertainment. She has sold over 55 million records worldwide and starred in multiple box office hits, including Monster-In-Law and The Wedding Planner. During 2001, while The Wedding Planner was the nation’s top-grossing film, her album, “J.Lo,” was No. 1 on the Billboard Top 200 Chart. The simultaneous No. 1 honors made Lopez the first woman in history to have a No. 1 movie and album in the same week.