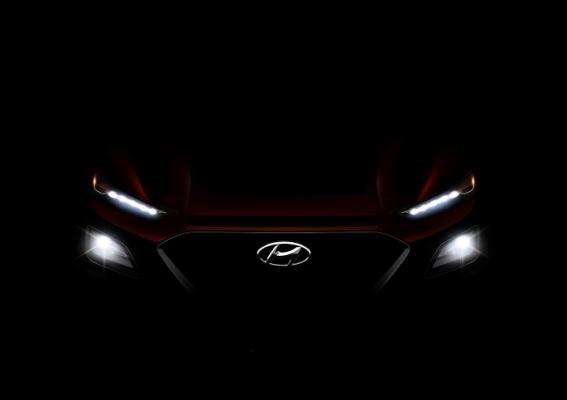 Maybe you’re getting tired of reading about Hyundai Kona teasers, maybe you aren’t, but either way, Hyundai has given us one more.
Advertisement

Reports are that we’re just about 10 days away from seeing the vehicle for real – rumor has it that Hyundai has a June 12 reveal planned – but the most recent images show almost everything.

We’ve reported before that the Kona will have black flared wheel arches and Hyundai’s signature grill, and the new images confirm that. They also confirm that the vehicle will have a sporty look overall, and it appears that roof will be blacked out.

Other key design elements include running lights located above the headlights and what looks like a roof spoiler extending out over the hatchback.

CNET reports that the Kona will have an 8-inch head-up display, Hyundai’s first, as part of its interior design.

As previously noted, the Kona will play in the fast-growing subcompact crossover class. Expect it to be cross-shopped against the Mazda CX-3, Jeep Renegade, upcoming Ford EcoSport, Chevrolet Trax, Toyota CH-R, and Honda HR-V.

We’re just glad that the unveiling is almost here. While it’s a bit unusual to see a vehicle unveiled outside of an auto show (our own guess was that we’d not see the Kona until the Los Angeles Auto Show this fall), it’s becoming more and more common, as automakers seek to stand out from the competition.

The slow drip of teasers is a common ploy, too, to build up excitement. While a subcompact crossover may be less exciting than, say, an 800+ horsepower Dodge Demon, the mass-production Kona will matter more to Hyundai than the limited-release Demon. The Kona could boost Hyundai if it ends up being one of the more popular vehicles in a hot segment that automakers can’t afford to ignore right now.

The real thing will be seen soon. Until then, enjoy the teasers over at CNET.

For Some Former Daimler Managers Daimler Is Authority, While Tesla Is Like a Startup
How Daimler Unintentionally Subsidizes Tesla Giga Berlin
END_OF_DOCUMENT_TOKEN_TO_BE_REPLACED