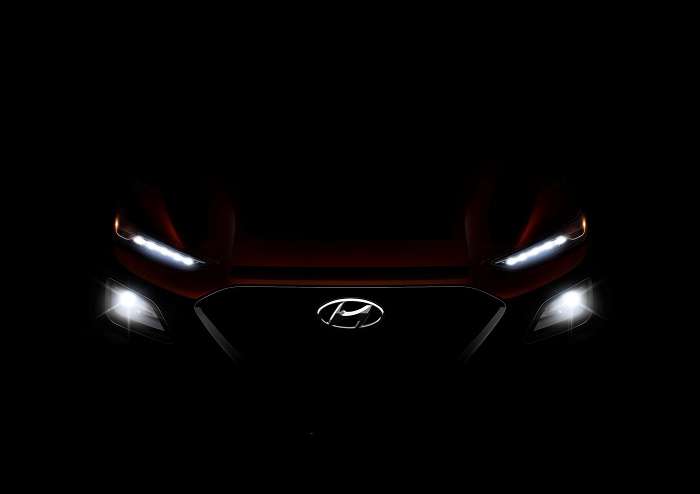 The Hyundai Kona has been unmasked. Mostly.
Advertisement

Hyundai’s upcoming subcompact crossover is expected to be unveiled this summer (if that doesn’t happen, then maybe it will appear at the Los Angeles Auto Show in November), but it was spied mostly uncovered recently. It was posing for a video shoot in Portugal.

Its looks are a blend of Jeep Cherokee and Hyundai Sonata (I see a little bit of Ford in there, too, at least in the grille). It has body cladding at the rear to make it look tougher and a so-called “floating” roof, which is part of a current trend in design.

The Kona will likely have four-cylinder power, probably from a 1.6-liter engine that’s likely to be turbocharged.

Competition for the Kona is expected to come from the Chevrolet Trax, Nissan Juke, Ford EcoSport, Jeep Renegade, Mazda CX-3, and Honda HR-V.

At first glance the Kona does look a little bit like a mishmash of some of the competition’s design themes, but it also has a bit of a luxury look, thanks to the floating roof and the shape of the rear taillights. It’s hard to tell if the plastic body cladding actually makes it look tougher, or if it instead cheapens the appearance.

The big, wide grille is something we’ve seen on Hyundais and Fords lately, and since most automakers like to maintain familiarity across the brand, it’s not a shock that the Kona would have a grille seen in other Hyundai models.

Overall, it’s a good-looking little runabout, perhaps one of the more stylish in the class.
Of course, there might be slight styling variations for the Kona depending on market, and some of the styling details seen in the spy shots may be specific to one trim or another.

Still, we have a pretty good idea what to expect from the Kona, whenever it may be unveiled.