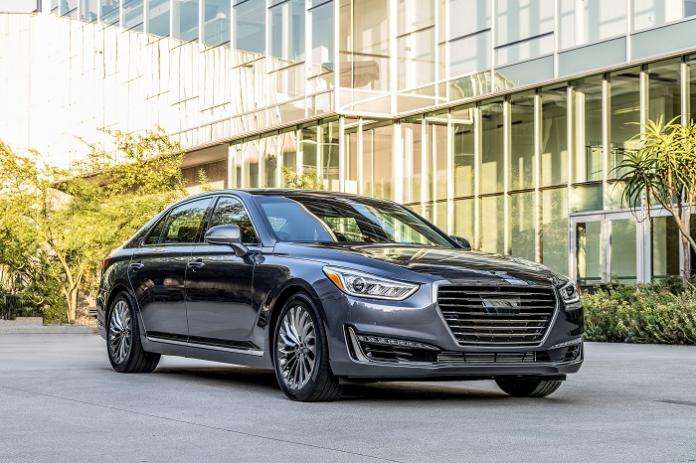 Spy shots out of California appear to show the Genesis G70 sedan, which will slot below the G80 and G90.
Advertisement

Poised to compete with the BMW 3-Series, Lexus IS, and Jaguar XE, the G70 will be the smallest sedan in the lineup.

The test car was heavily disguised with camouflage, but reports indicate that the car will take its styling cues from the Genesis New York concept that was displayed at the 2016 New York Auto Show. Design elements include LED taillights, projector-beam headlights, a blacked-out mesh grille, alloy wheels, vented bumpers, chrome-lined windows, and Brembo brakes.

Inside, the shots show a steering wheel and dashboard layout that may be lifted from sibling brand Kia’s Stinger sedan, and a center-console HVAC control system and dashboard infotainment screen that are both different than what’s seen in the other two models.

It’s not clear what will be under the hood, but a turbocharged four-cylinder and a V-6 option – likely the 3.3-liter V-6 – seem likely, as does a hybrid variant and an eight-speed automatic transmission. Reports indicated that rear-wheel drive will come standard, with all-wheel drive available.

The car is expected to debut this year, and with the 2017 Los Angeles Auto Show coming up in the fall, that seems the safest bet. Expect an SUV or two and a coupe model to follow soon.

If Genesis is able to build a car that can reasonably compete with the class-dominating 3-Series, that’s exciting news. The entry-luxury sports sedan class is a competitive one, and Genesis will need to get this car right to help the brand grow.