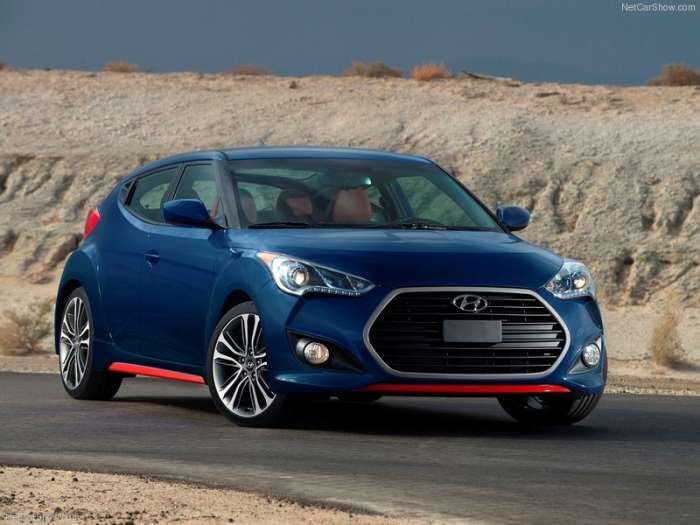 A Redesigned Hyundai Veloster Should Be Here Soon

Hyundai's quirky hatchback has been a cult favorite over the last several years, but its future has been uncertain. Based on the latest spy photos, though, it looks like the second-generation Veloster will be here before we know it.
Advertisement

The Hyundai Veloster, the quirky hatchback with a rear door only on the passenger side, has been around since 2011. In that time, it’s been gradually updated, but it has yet to receive a significant refresh despite being on sale for well over five years. But while Hyundai has remained quiet in regards to the Veloster’s future, the latest spy shots strongly hint that a second-generation Veloster is coming.

Autoblog recently acquired spy shots of a hatchback that it believes are of the new Veloster testing. If you head over to their site, you can see all 10 images. The car is heavily camouflaged, but if you look closely, you can see hints of styling cues borrowed from Hyundai’s next-generation design language.

Most importantly for Veloster fans, though, you can also see that the asymmetrical door design is still in use. The back, meanwhile, is camouflaged more heavily than the rest of the car, suggesting that Hyundai still plans to keep the Veloster’s aggressively styled rear end. If you were concerned the next-gen Veloster turn into a smaller version of the Elantra GT, don’t worry. The Veloster’s quirkiness appears to still be intact.

Also see: Why Hyundai Should Build an All-Electric Veloster EV As The Best Way To Improve It.

How Will the Redesigned Veloster Drive?

What we can’t say, however, is exactly how the Veloster will slot into Hyundai’s lineup. If the i30 N makes it to the U.S. from Europe as the Elantra GT N (Elantra N?), there may not be room for another truly hot hatch. Then again, the Elantra GT and the Veloster have never quite appealed to the same demographic. Perhaps there’s room for both hatchbacks to get the N treatment.

Even without a significant boost in power, expect the redesigned Veloster to handle much better. We’ve already seen what Hyundai’s suspension gurus can do with the recently launched Elantra Sport.

But while it would be great to see the Veloster Turbo get quicker, let’s hope Hyundai still offers a base Veloster that’s still super affordable. For economy car customers who would like an extra dose of style without having to pay an arm and a leg, the base Veloster has pretty much been the only player in the game. It might not handle like the Fiesta ST, but is there anything wrong with that?