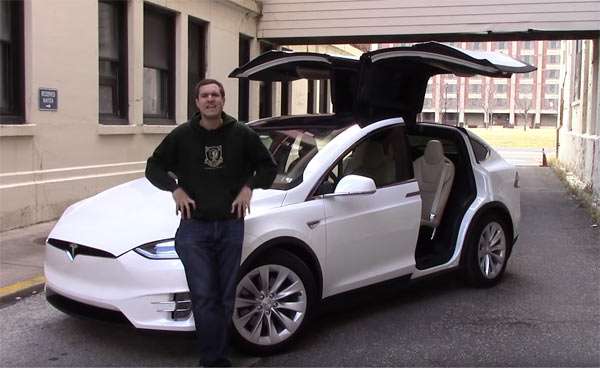 Is The Tesla Model X Really That Awful? This Video Will Make You Decide Either Way

'A sports utility vehicle with Falcon wing doors' says Tesla or is it a 'minivan with pigeon wing doors' according to this reviewer. Which statement do you agree with about the Tesla Model X?
Advertisement

Doug DeMuro a regular vehicle reviewer from the off makes his opinion clear about the Tesla Model X or does he?

Having such a polarised opinion about any vehicle is going to put the hackles up for some owners, but when you go totally one way or another with a car review, you have to inject at least a little bit of humor to get the point across and this is what Doug does very nicely, but on to the review itself.

A Pigeon or Falcon?
Doug has clearly had some issues with Tesla in the past, saying the model S 'isn't cool any more,' argued about their sales headlines and their vanity plates, but this should be off-the-cuff remarks when it comes to a full car review. Even before the video gets through a minute, Doug clearly proclaims why he clearly isn't a fan of Telsa. It's almost so polarised an opinion, it's almost like a kid saying I just hate it, I just do and thats the end of it!

So he starts off by compiling all the complaints posted online from blogs to forums to back up his claims into this video.

Firstly, the doors. Oh, he doesn't like the doors and this is an obvious point as it's usually a matter of taste and practicality if you want to opt for a vehicle with gullwing doors like the model X. Totally understandable, but referring to them like pigeon wings is like referring to any vehicle from the past with similar doors. You would never say a Pagani Huayra with its gullwing doors looked pigeon like, but we get the point on practicality, as a vehicle that is meant to be used and commuted in every day needs to be as accessible as possible.

Oh, hang on a minute, Tesla have thought of this and the doors can open in almost the tightest of spaces, intelligently moving upwards and outwards. Darn it!

Now onto the huge dashboard screen. The complaints here are that it freezes all the time and during the video it does just that. Employing a few obvious counter measures like a sink plunger and screen licking seems to do the trick here, but we don't recommend these tactics. Probably best to just get a software upgrade.

The autopilot, will it stop in time and before turning Doug's legs into a pulp? It works fine here, so tick that box. Storage capacity. Have you filled up that spacious rear trunk? No worries, just put the rest in the front trunk. Remember no engine, so plenty of room for other stuff.

Here's the big one, the actual range of the model X. 257 miles of range. Oops, the same as a full tank on a Dodge Viper? Darn it!

So to cover all the usual complaints about the Model X seem to be easily countered, but the vehicle does have some aspects to address. The ride quality is said to be a little hard, external noise is amplified due to the lack of engine noise, the steering can be a little vague and some are worried about the integrated windshield and sunroof. If you're thinking about installing a roof rack, forget it. However, the instant torque and performance is clear on this vehicle and Doug seems to agree.

To conclude, the model X does have some flaws, but like Doug says its the price you pay for being an early adopter of a vehicle with the latest technology and parts but most importantly, the model X is a cool vehicle and it seems at this point the future. That's even coming from a reviewer who previously made fun of Tesla vehicles.