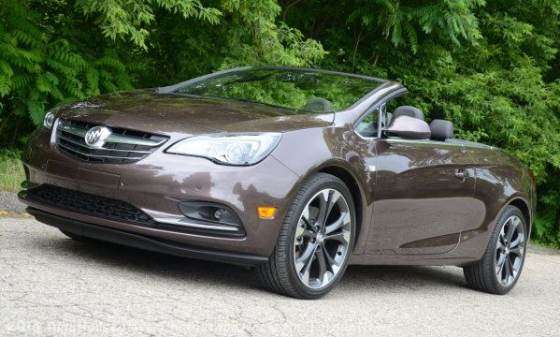 The convertible Buick Cascada is nearing one year of production. It's ancestor, the Reatta only made it four. Recent reviews point to a car that needs help if it's going to succeed.
Advertisement

The Cascada was introduced in the 2015 North American Auto Show and started appearing in the showrooms in 2016. You might even remember seeing the Cascada commercial during this years Super Bowl.

The Cascada features a soft top that can go down while in gear. Of course you have to be going slower than 31 MPH. The car also features deployable roll bars that automatically detect a rollover crash, and beautiful 20 inch wheels.

However, recent reviews on the Cascada have not been favorable. Most comment on the lack of a driver feel in the steering wheel, and it's heavy weight (almost 4,000 pounds). It seems as though Buick didn't learn from its past and haven't made the attempt to make a sporty convertible. In this instance, the Cascada is a cruiser, but that's what a classic Buick is.

Make no mistake, the only "classic" things about this car is its ridiculous weight, and its poor handling. As a Buick enthusiast, I'm somewhat disappointed in the Cascada. This is Buicks chance to gain even more grip on the younger generation with a sporty feeling convertible.

The sales numbers for the Cascada is not bad for only being released since January. 5,300 units of the Buick Cascada have been sold since the beginning of this year. In the first year of the Reatta, there were only 4,700 units sold. The Cascada is clearly doing better than the Reatta.

Also See: 2016 Buick Cascada Review: The Most Interesting Buick of the Modern Era.

Elon Musk Says Tesla To Offer Car Insurance in Texas Next Month, But These Challenges Exist
Tesla Co-Found Plans To Build a Battery Factory and Shift The Industry
END_OF_DOCUMENT_TOKEN_TO_BE_REPLACED