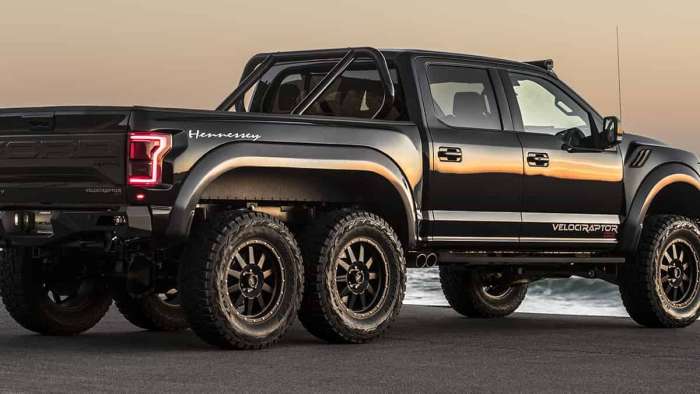 When you see a Ford F-150 all tricked out with fender flares, special graphics, huge wheels, and four rear wheels, you immediately know that this isn't an ordinary pickup. You are looking at a Hennessey Performance Engineering VelociRaptor 6X6 based on a Ford F-150 SuperCrew Styleside Package on the long-wheelbase -- 145 inches -- with the 5.5-foot bed.
Advertisement

In the world of specialized Ford F-150 Raptor 6X6 pickups, there are 6X6 versions and then there are other 6X6 versions. Well, let me explain a little more. A couple of months back, Torque News ran a story of a Ford F-150 6X6 conversion that had a bit of trouble getting up a small hillock. It seems that the conversion either didn’t use four active rear wheels. It appeared that perhaps two of the four wheels on the rear were sitting there like a pair of spectators, so to speak as the vehicle was a 6X4 with a couple of added non-driven wheels.

The Tale Of The 6X4 And Spinning Wheels

The reason we made that comment was that if you saw the rear end of the truck as it was trying to climb the small hill, the rear-most set of wheels were spinning up a cloud of blue smoke, while the inner wheels sat there doing little. In a few minutes of trying, the rear end of the 6X4 started to buckle a bit toward the body.

Enter a real 6X6 model with the power to all six wheels. What happened next is classic. The 6X6 with powered wheels drove up the hillock with no problem. If this were a story about a runner, we’d probably say, “it hardly broke a sweat.” That’s the difference when you have a true 6X6 and what amounts to a 6X4. It seems that when someone did the conversion of the original 6X6 (or so it seemed), they only added a second rear non-driven axle so there was only one set of driving wheels in the back. The non-driven axle was on the inside. It may be that since there seemed to be no interaction between the front wheels and the rear, it could have easily been a 6X2 model. Who can say?

Why The Hennessey VelociRaptor F-150 Interest?

So, you might be asking, why all this sudden interest in 6X6 models? It seems there is a Hennessey 6X6 Ford F-150 Velociraptor on eBay for the fantastic price of $365,995. That’s right; for nearly $400,000, you can have your own pavement-buckling Hennessey VelociRaptor 6X6. You do have to admit that is a lot of coin for a six-wheeled vehicle. But, if you think it’s worth it, then go for it. For the price, you get a Hennessey-tuned VelociRaptor 6X6, based on the Ford F-150 four-door SuperCrew Raptor pickup. Of course, the price includes the Ford F-150 and all the fixings. Hennessey bases the VelociRaptor 6X6 on the 2017-2020 Ford F-150 Raptor.

Next, there are upgrades to the:

Since Hennessey is one of the auto industry’s premier tuners, you know that the 3.5-liter, twin-turbo Ford V-6 is tweaked quite a bit. For example, Hennessey upgrades the existing turbos so the 6X6 has more power and performance.

By the time, the tuning crew has finished with the installation of the turbos, stainless steel exhaust mods, an upgraded front-mounted air-to-air intercooler and plumbing as well as a re-tune for the factory computer, the powerteam cranks out more than 600 horsepower. The power is taken to the wheels by a 10-speed automatic transmission.

Other upgrades that a buyer may include are an upgrade to Brembo front and rear binders, plus updates to the electronics and armoring systems for more reliability. The interior features leather upholstery with Hennessey graphics. On the outside, the body features Hennessey graphics.

Hennessey Sums Up The VelociRaptor F-150

Summing up the philosophy of the Hennessey VelociRaptor 6X6 John Hennessey, head of Hennessey Performance Engineering put it bluntly: “Our VelociRaptor 6X6 is pure aggression on wheels – all six of them.” He continued that the “Ford Raptor is … one of the best all-around trucks ever built. We are excited to help take it to the next level both in terms of performance and exclusivity.”

Marc Stern has been an auto writer since 1971. It was a position that filled two boyhood dreams: One was that I would write, and two that I write about cars. When I took over as my newspaper’s auto editor, I began a 32-year career as an automotive columnist. There isn’t much on four wheels that I haven’t driven or reviewed. My work has appeared in Popular Mechanics, Mechanix Illustrated, AutoWeek, SuperStock, Trailer Life, Old Cars Weekly, Special Interest Autos, and others. Today, I am the Ford F150 reporter for Torque News. I write how-to and help columns for online sites such as Fixya.com and others. You can follow me on Twitter or Facebook. Most of Marc's stories can be found at Torque News Ford coverage. Check back again and search for Torque News Ford F-150 news for more F-150 truck news coverage. Read most of Marc's stories at Torque News Ford for daily Ford automotive news coverage.