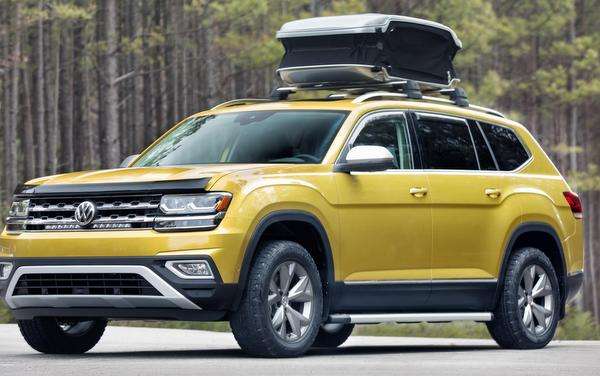 Want A VW Vanagon Replacement? Wait For The Weekender

When the Chicago Auto Show opens one of the concept vehicles that will appear could make it to market, the VW Weekender. The Weekender tips its cap to the iconic Vanagon and Eurovan models of three decades ago when conversion vans were insanely popular. Though not in the lineup just yet, pressure from the public may just turn this concept into reality. By the way, it is honestly more than a concept as all of the parts are available from VW and the automaker can make it happen if the demand is there.
Advertisement

Volkswagen was no exception. The automaker produced two models, the Vanagon or Eurovan with their pop-up roofs and “penthouse” suites – better known as the canvas-walled bedroom for the adults while the kids slept downstairs on the three available built-in beds. For Volkswagen aficionados, the full-sized vans were not only highly attractive but also iconic.

Many were visibly upset when the automaker announced the phaseout of those campers at the end of the 1980s. Indeed, many VW fans have been waiting for their return in one form or another. And, return they will if the automaker decides to produce the feature-laden Weekender concept that is slated to appear at the Chicago Auto Show that is set to open this weekend.

Using the brand-new Atlas three-row crossover as its basis, the Weekender concept is fully functional. Since it is, if the automaker gives the go-ahead, then there could be “Weekenders” heading to dealer showrooms almost as soon as the Atlas officially goes on sale.

Looking closely at the Weekender, you can easily see that VW has tipped its cap to the iconic camper vans. It uses a roof-rack-mounted Urban Loader cargo box, which can expand to store 17.7 cubic feet of cargo. The rack-mounted storage unit looks very reminiscent of the roof popping Vanagon and Eurovan. The visual similarity is very close.

Volkswagen based the Weekender concept on the SEL Premium Atlas model. It rides on standard 18-inch wheels.

An all-wheel-drive version of the Atlas, the standard powerplant is Volkswagen’s 276-horsepower 3.6-liter V-6. VW uses its eight-speed automatic transmission on the Weekender.

The Weekender concept shows carrier roof rails as well as wheel-to-wheel running boards (sidesteps in today’s VW-speak). Window and hood deflectors are standard as is a heavy-duty trunk liner that includes seatback coverage.

There is no official word on whether the Weekender will appear as a separate model. However, the automaker went to great pains to let potential customers know that the accessories will be available from VW dealers when the crossover begins arriving at local showrooms this spring.