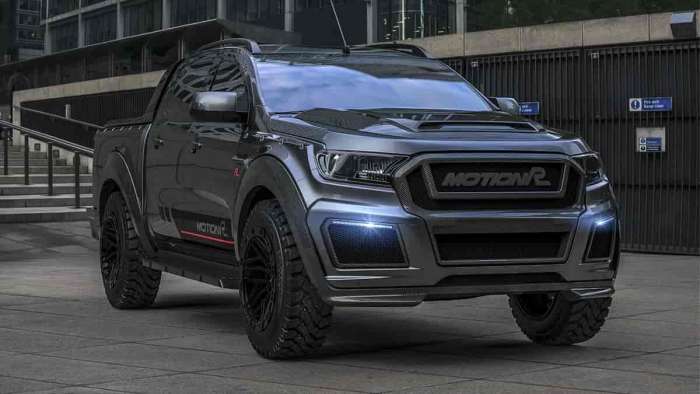 Why is it that the Brits have all the fun cars and great-looking trucks? For example, they have the award-winning Focus ST – Top Gear’s “Hot Hatch of the Year” -- the Kuga (small SUV), and the Ranger Raptor, available only on the other side of the pond.

If you are wondering about the types of Rangers available Europe and the U.K., there’s the whole range of configurations offered by Ford – the SuperCrew, SuperCab, and the standard cab. And, there’s a tuner in the U.K., that will take them up a notch, Motion R.

Motion R kicks things up substantially by its extensive use of carbon fiber in the significant body and trim pieces used to set its Ranger Motion R apart.

Headquartered in Dungannon, Northern Ireland, Motion R has been building a solid reputation by tuning Ford Transit vans. With an excellent reputation established, the van tuner is expanding its purview to the Ford Ranger. The Ranger represents the next logical step.

Motion R is a significant player in the carbon fiber (CF) upfit market. To upfit, the Ranger properly takes a bit of time but when the crew at Motion R has finished, they have created a handsome vehicle that features carbon fiber prominently.

Specifically, Motion R replaces the front bumper with a carbon fiber bumper that integrates the daytime running lights. It also makes extensive use of carbon fiber (CF) in the front wings, rear quarters, and rear bumper. One note about the rear bumper is that Motion R has integrated a stainless exhaust in the bumper.

The Ranger Motion R offers two CF exterior packages, its 2X2 Weave and the Forged Carbon Option, which consists of:

To complete its makeover, Motion R offers an interior upgrade that is right in tune with the rest of the CF architecture. The dash uses CF trims – there are two -- are 2X2 Weave and Forged Carbon. A new, flat-bottomed steering wheel option is available with either style interior trim. For upholstery, Motion R offers Nappa Leather, which extends to the doors and other panels.

To smooth handling out and to give the Ranger Motion R a bit more, the tuner mounts its 20-inch OR1 concave alloy wheels at each corner and shods them with offroad tires.

One of the key differences between the Euro Ranger and the U.S. Ranger lies in the available engines. Three diesel engine options power the Euro Ranger – and the Motion R. The engines include:

There are two transmission options available for each engine – a six-speed manual or a six-speed automatic.

Marc Stern Marc Stern has been an auto writer since 1971. It was a position that filled two boyhood dreams: One was that I would write, and two that I write about cars. When I took over as my newspaper’s auto editor, I began a 32-year career as an automotive columnist. There isn’t much on four wheels that I haven’t driven or reviewed. My work has appeared in Popular Mechanics, Mechanix Illustrated, AutoWeek, SuperStock, Trailer Life, Old Cars Weekly, Special Interest Autos, and others. Today, I am the Ford F150 reporter for Torque News. I write how-to and help columns for online sites such as Fixya.com and others. You can follow me on Twitter or Facebook.