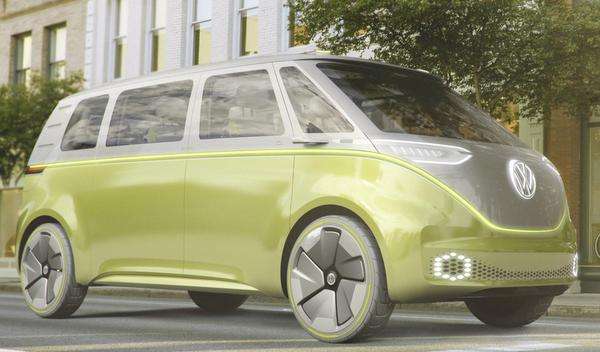 For Volkswagen electric cars are like a new canvas for an artist. They represent a new design paradigm that promises to reshape the familiar lines of our vehicles.

The automaker has, as a result, developed a brand-new design language for a new generation of electric vehicles. Klaus Bischoff, head of VW brand design, indicated that the key to the changing shape of future vehicles is the battery pack.

Electric vehicles, while more flexible in many design areas, also pose unique issues for designers. For instance, the I.D. vehicle that debuted at this month’s Consumer Electronics Show in Las Vegas, is taller a conventional internal combustion-engined vehicle, said Automotive News Monday, to carry its battery pack under the floor. The I.D. hatch concept shown at CES rolls out in 2020. An SUV joins the I.D. line in 2022, while a VW Microbus-style MPV rounds out the line in 2025. They are all based on VW’s new MEB modular architecture.

The freedom that losing an engine compartment offers allows designers to make vehicles much more unique.

Because the engine compartment is gone, the development team can move the A-pillar forward, while the hood shrinks to the minimum needed to meet crash rules and pedestrian safety guidelines. The flexibility allows designers to increase the angle of the windshield for the best aerodynamics. The dashboard was also moved forward by five inches, allowing more legroom. Developers are also planning extensive electronics integration that features embedding 5G (5th Generation) systems in future electric vehicles. Volkswagen plans extensive 5G integration in its I.D. vehicles

"To gain the travel distance -- range is essential -- we need to have outstanding drag coefficients, and this will also influence the shape of the cars quite a bit," Bischoff said in his interview. The result is that the I.D. hatch has the “interior space” of [midsize] Passat “with a footprint smaller than the Golf.”

Designers are continuing to refine the front ends of VW’s new electrics. They have taken a bit from Tesla and have designed out all of the hardware and plumbing needed to cool an engine. “We don’t want a grille,” Bischoff explained in his interview. “Volkswagen, if you look back” [at its history] “was born without a grille.” The original Beetle had its “engine in the back.”

On the inside, VW designers are aiming at ultimate minimalism by eliminating things like consoles in favor in a tablet device and a heads-up display.