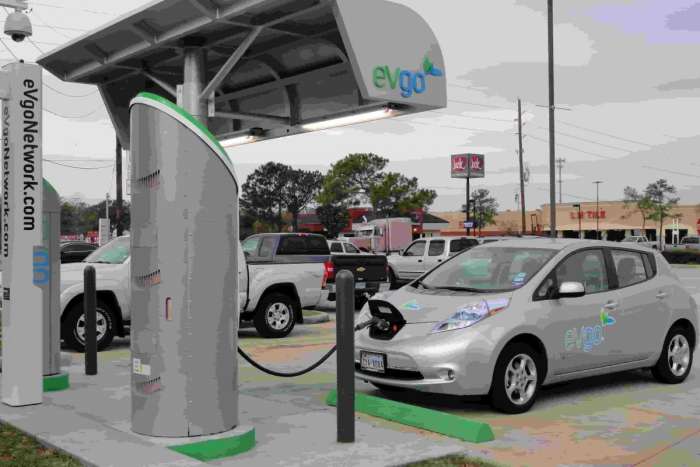 Speedy Charging Stations Have Problems Of Their Own

If there's one thing that few electric vehicle supporters talk about it is the problems with speedy charging stations. The stations not only generate heat but there is also the potential of fires. Granted, the manufacturers will control the problems, but, how much can they do it?
Advertisement

Today, while reading a piece in Torque News by Armen Harayen, it struck me that there is a certain amount of hubris coming from each automaker as they announce plans for super-speedy charging. GM Charging Plans Outpace Tesla.

Looking at GM’s planning, the plan to stuff enough charge into their electrics so they can travel up to 180 miles in only 10 minutes. And, if you look at the physics of the plan it is doable with a caveat, don’t forget the heat.

The Charging System Is Responsible For Heat

You see in creating the electrical current needed to charge a rack of batteries; the charging system will generate a rather hefty amount of heat. It’s not something that is debatable. It is true as surely as the sun will rise in the east tomorrow.

Indeed, you probably have run across this your self with your smartphone. In one of today’s less-than-understandable moves, the auto industry has created a full-time universal remote charger system that will charge your smartphone whether it is an Apple or an Android or it is Samsung or a Kyocera. At first glance, this would seem a great value as it will let you keep on talking while keeping your phone charged. The issue here is when does the charging system go from benefit to negative. At some point, you see, unless your phone has a charger cutoff for the remote charger, it will keep on charging until there is no place left to stuff the electricity. When this point occurs, the power becomes heat.

Worse, the heat can harm your batteries ultimately limiting the amount of power you can stuff into them. In other words, your 12-hour cells become 11.5-hour devices and then 11-hour batteries and so on, thanks to the heat.

If you read the last paragraph carefully, you will see something else; besides the problems with the charge, the batteries also are beset by heat.

Moving this into the quick-charge car networks, no matter what the automakers do about this problem (heat), there is no way around the fact that at some point, batteries charge. In turn, the charging cells make heat.

So, let’s say there is some fail-safe charging technology built into the quick-charge networks, which there needs to be. At some point or other, it is quite likely that the fail-safe technology fails and you are left with a high in-rush current continually cooking your batteries so that ultimately you may be left with a pile of highly questionable battery packs.

Granted, you may look at your car’s battery cooker and think “there’s no way that this can harm my electric’s batteries because the top voltage available is only 18 volts and today’s battery packs can handle this heat load. Would that be true? Instead, the way the failure of the quick-charger network station might happen is that the capacitors that help to set the voltage level fail due to the constant heating, cooling, and overstressing cycles.

Granted, it shouldn’t happen for 300 or 400 periods, but given even a 10 percent device failure, the number of batteries that might fail on any given day is truly staggering. The reason for the battery failures is that once the capacitors and their associated diode packs go, nothing is keeping the high-inrush current from hitting the cars sitting on the network. So, you think the relatively low voltage will keep your batteries safe. The answer is this: it won’t.

If your quick-charge network suddenly loses its protection, your car batteries will be cooked by the 25 or 30 amps at 18 volts rather quickly.

And, there’s another danger, fire. Today’s car batteries are a mix of lithium-ion and nickel-metal hydride each of which can burn when exposed to high currents and the attendant heat. So, let’s say you have a fast- charge network with a charging station that has gone and a car whose batteries are taking too much current, what do you think happens? You have a car that will burn; there is little question of it.

Granted, it won’t happen today or tomorrow so that if you are planning on purchasing an electric, you don’t have to prepare for it now.
However, ultimately, it is possible that a combo of age, maintenance or lack thereof can create conditions that will set up either a charging station failure or potential fire loss. It’s just a matter of time.

John wrote on September 3, 2018 - 9:47pm Permalink
400kwh dumped down the wiring for a few years is gonna be a problem. How many of today's charging stations are offline because they need maintenance. It will take an accident with injuries before folks wake up to the problems. Humans have never been on top of the necessary maintenance of anything.

LG's New EV Battery Plant Is a Welcome News for Tesla
Tesla Giga Berlin's New Hurdle: It's Not Only the Gov't, but Now Tesla Itself
END_OF_DOCUMENT_TOKEN_TO_BE_REPLACED