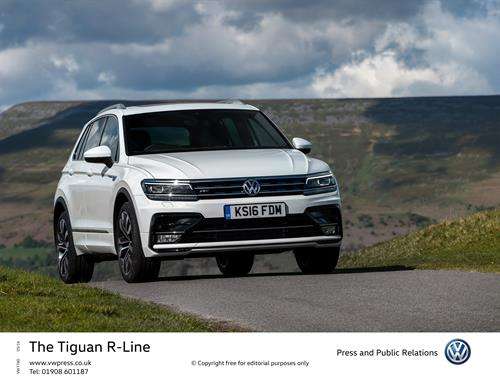 Volkswagen has confirmed that the incredibly popular T-Roc concept crossover that was greeted by enthusiasts and car dealers alike after the 2014 Geneva Auto Show will join it U.S. lineup in 2019.
Advertisement

Three years ago, a concept crossover made quite an impression with attendees at the Geneva Auto Show. The Volkswagen T-Roc, based on the Tiguan, debuted as a three-door compact crossover aimed at offroading. (There are many pretenders to offroading on the market. However, if you look at them closely they come up short, either at the height of their body pans, the size of their powerplants or in the availability of four-wheel- or all-wheel-drive.)

For a couple of years, it looked as if the T-Roc was to have been the concept that made it to the show exhibit stand but never got to the market. Yes, the factory agreed with dealers and auto show attendees, the T-Roc looks great, and its stats looked excellent, but, the factory still wouldn’t commit to production, unless there were a firm commitment from U.S.dealers to sell enough of them to make it profitable.

The auto business in the U.S. is “build-to-stock rather than build-to-order,” said Automotive News Monday. The ultimate decision on the T-Roc rested with the automaker’s 650 dealers. They have voted for it, and now the manufacturer has slotted it into is 2019 lineup.

The next step is deciding where to build it. Will it be made in Chattanooga, with Passat and Atlas; Puebla, Mexico, or imported from Portugal?

Complicating matters is the number of SUVs available from VW. At the moment, there are two, the standard compact Tiguan and the three-row, American-made Atlas. Next year, the long-wheelbase version will go on sale here. When T-Roc arrives in two years, the total number will be four, leaving dealers with some alternatives for buyers.

One factor driving the ultimate fate of T-Roc will be the price. Former VW dealer chairman Alan Brown said last year in an interview the concept was popular. “Everybody loves T-Roc, everybody. The only concern is whether it’s price is outside of the market, where it wouldn’t do the volume that it deserves to do.” So, T-Roc’s fate also hangs on its affordability which may lead back to the number of crossovers the automaker is selling.

T-Roc will launch in Europe in August as a 2018. All-wheel-drive availability is set to be optional.
To Use Expandable MQB Platform

T-Roc is another model that will use VW’s modular front-drive MQB platform. Based on the Geneva concept, T-Roc will ride on a wheelbase that is 0.3 inches shorter than Tiguan. It also 10 inches shorter overall than the current compact crossover. It is an inch wider, which will add to its offroad stability. Its roof is also 6.5 inches lower than the current offering.

The differences add up to a major differentiation for the new model. It will also have 19-inch wheels, compared to the wheels offered on the Tiguan.

Like other new VW offerings, there are substantial front-end differences, including a more raked fascia and grille. A black-finished roof cap with removable sections is separated from the body by aluminum strips. The concept also calls for two removable roof sections that give it a Targa, or an airy feel. Full of advanced technology, the T-Roc concept also called for articulated spotlights in the foglight nacelles; front- and rea-facing cameras and pseudo-skid plates.