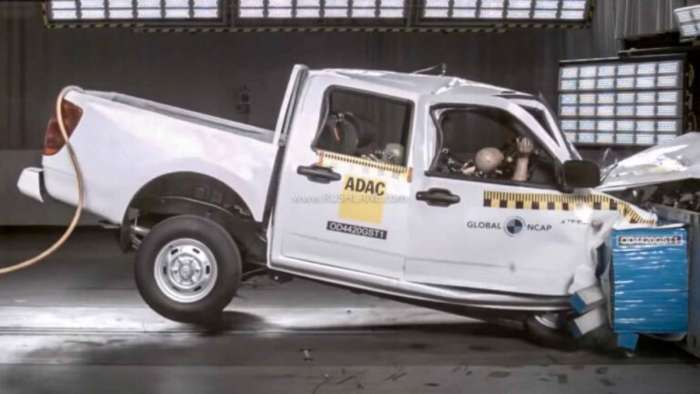 In Parts Of The World, PIckups Don't Live Up To F-150 Standards

When you watch the video of this crash test you will really appreciate just how safe trucks are here and in most of the world. There are parts of the world, though, where truck safety takes a back seat to expense.
Advertisement

It's incredible how much we take for granted in our pickups and SUVs today. For example, the National Highway Traffic Safety Administration (NHTSA) gave the Ford F-150 four stars. The Insurance Institute for Highway Safety (IIHS), which last rated the 2019 F-150, rated it as uniformly Good, except for the Poor headlights. IIHS has not yet rated the 2020 F-150. However, it is more than likely that the ratings will improve markedly.

In U.S., Pickups Are Safe

Both ratings tell us that the truck is intrinsically safe to drive or ride in. But, what about the rest of the world? Trucks in other parts of the world are reasonably safe. Worldwide, trucks generally carry most of the same safety equipment, but when Chinese manufacturing places the body on the frame and launches the vehicles toward Africa, something happens, they end up unsafe.

Motor Trend and The Drive had a look at a Chinese truck model, crashed as part of the Global New Car Assessment Programme (Global NCAP), the results are jaw-dropping. The publications looked at testing of the Great Wall Steed 5 pickup. In its testing of the pickup, it scored zero stars for safety. The Global NCAP is the equivalent of testing platforms used in the United States.

Note that other vehicles manufactured for sale in Africa include this essential feature, as well as airbags. The Steed 5 lacks that basic safety amenity. And then there is anti-lock braking (ABS), another feature we take for granted. ABS isn't there, as well.

There Is A Silver Lining, Of Sorts

In somewhat of a silver lining, the publications point out; if you are a child in a properly belted child seat, you have a better chance of avoiding injury than adults. It is because the Steed 5's child safety rating is one (1). Not incidentally, the passenger has a better chance of avoiding an injury because there's no steering column on that side.

So, you might ask why Chinese cars sent to Africa are the way they are? The answer is they are inexpensive. The Steed 5 is also known as the Wingle 5 in Kenya, for instance. A base model reportedly has a cost of $14,627, likely a bit more than you might expect, say Motor Trend and The Drive.

They drew a comparison to the cheapest car in the U.S., the $15,135 Mitsubishi Mirage, which is small by anyone's standards. However, it is safer than China's Steed 5.

Steed Available Elsewhere – It's Safer, Too

The Steed 5 is available in Europe, where it does have more safety features. It's not available in the U.S. Car reviewers generally aren't enthusiastic over the Chinese entry. Indeed, auto journos in Britain have described the Steed 5 as agricultural, which isn't great, no matter how you parse it.

Marc Stern
has been an auto writer since 1971. It was a position that filled two boyhood dreams: One that I would write, and two that I write about cars. When I took over as my newspaper's auto editor, I began a 32-year career as an automotive columnist. There isn't much on four wheels that I haven't driven or reviewed. My work has appeared in Popular Mechanics, Mechanix Illustrated, AutoWeek, SuperStock, Trailer Life, Old Cars Weekly, Special Interest Autos, etc. Today, I am the Ford F150 reporter for Torque News. I write how-to and help columns for online sites such as Fixya.com and others. You can follow me on Twitter or Facebook. Most of Marc's stories are part of Torque News Ford's coverage. Check back again and search for Torque News Ford F-150 news for more F-150 truck news coverage.