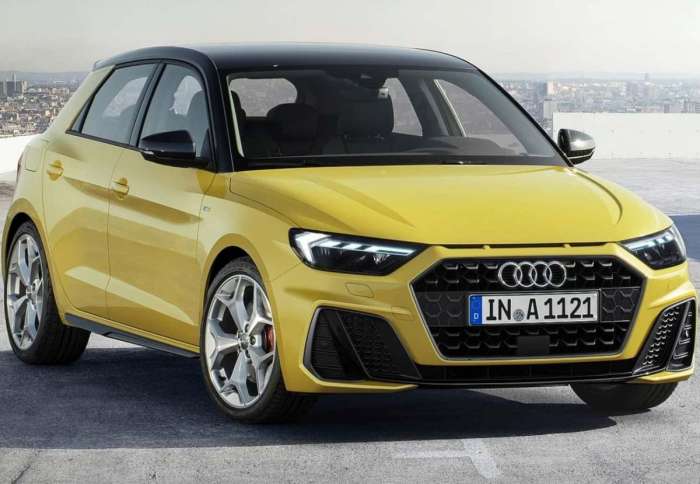 Looking for an Adorable Audi? Try the A1, When it is Available

At last, the real A1 images -- and information -- are available. One thing you will notice about the A1 is that it is adorable, don't you think?
Advertisement

It May Just Be the Adorable Audi

Indeed, some have called the A1 Sportback adorable.Audi Debuts 2019 A1; It's Called Adorable And, it may just be that. Look, it is only 13.2 feet long; 5.7 feet wide, and 4.6 feet high. In other words, it is rather stout, but it does fit into the adorable mold quite nicely.

Drawing heavily on two models – the Ur-Quattro and the Sport Quattro – the A1 Sportback looks like but isn’t really, it’s ready to rally. Its lines suggest a performance machine. From the side, its sloping roofline in black gives it a far more sporting look than its predecessor.

The Cargo Space Is Up a Bit

There is a variety of engines available for the A1. At the low end, there’s a three-banger that cranks out 95 horsepower, while on the other end, there’s a turbocharged 1.4-liter four that produces up to 200 horsepower. The three-cylinder is available with either a six-speed manual or an S-tronic dual clutch. The top-of-the-line S is available only with the S-tronic option.

The A1 is available with all sorts of new tech. It has ditched the tablet-style setup and has adopted Audi’s Virtual Cockpit styling, instead, that is similar to the A8. Is the A1 Similar to Audi's A8?The standard 8.8-inch MMI ® Touch Infotainment system is conventional. Top trim levels of the A1 get a larger 10.1-inch screen.

Some of the Design Elements are a Paradox

Interestingly, though the A1 uses the Virtual Cockpit styling, the A1 has some paradoxical design elements. Instead of relying on the Virtual Cockpit, the implementation stops at the A/C and stereo where there are still physical dials. The A1 also has automatic safety systems that include: lane change warning, pre-collision warning with automatic emergency braking, and adaptive cruise control.

The Audi A1 won’t be available until the 2019 model year. There’s no preliminary information available about pricing just yet.