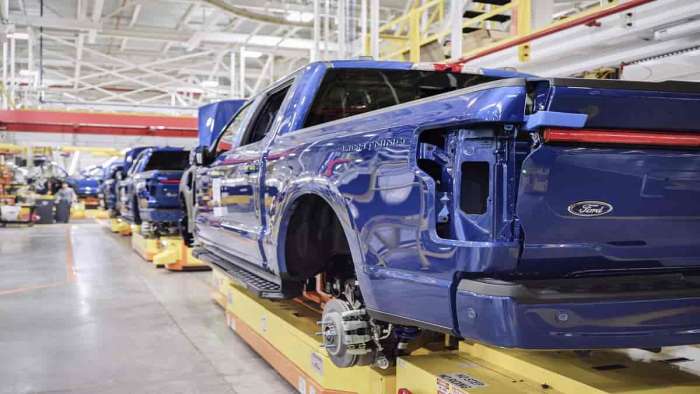 With the start of LIghtning production, Ford is worried that there might be folks who jump in and try to jack up prices for new Lightnings by buying them at MSRP and then jacking the price. Customers for the new electric pickup may be forced to sign a one-year resale ban. It isn't unprecedented.
Advertisement

You would think that with this week's launch of its electric pickup, Ford would be doing its happy dance as it started to turn its reservation bank into real customers whose vehicles were contributing to the automaker's bottom line. The automaker is quite happy, but a fly has flown into the ointment, as the saying goes, even as F-150 Lightning pickups continue to roll out of the River Works factory.

There will likely be very few reservation-holders who don't turn their reservations into orders. Indeed, Ford has announced that the entire 2022 production run of the Lightning has sold out. And, now that the first units are rolling out to those who have turned their reservations into orders, there should be no snags. Indeed, ordering a vehicle is as old as the car industry, roughly 120 years old. However, there is a wrinkle that is hitting the otherwise orderly order-build-buy process.

According to Inc Magazine, those who have bought a 200,000 Lightning may have to sign a contract that forbids the resale of the pickup for a year. Or Inc observes, "It’s the latest development in the highly anticipated launch that turned into something of a feeding frenzy.”

The magazine quoted a Twitter account, @F150Gen14, which posted an image of the resales ban letter that has since been confirmed. The letter warns dealers against demanding added fees from customers who have already paid deposits to pre-order the truck. The letter further warns that any dealer who charges added fees may find their supply of Lightnings cut off.

The article also quotes Motor Trend, which pointed out “there’s nothing to stop dealers from simply raising the well over the” suggested retail price “thus profiting from the supply-demand mismatch slightly.”

The letter offers dealers the option of signing a no-resale-for-a-year clause in the sale paperwork. This should prevent “speculators from buying up the trucks and selling them to impatient buyers at a premium.”

The move is “astonishing … but not completely unprecedented,” the Inc. article notes. For example, in 2017, Ford placed a no-resale-for-two-years requirement “on buyers of its GT model.” The GT is a unique number – a “two-seater sports car created to commemorate the company’s triumph in the 1966 24 Hours of Le Mans” – the subject of the famous film “Ford v. Ferrari.”

Purchasing a GT wasn’t for the faint of heart as the GT had a “starting MSRP of just under half-a-million dollars, and even if you had the cash, it was very difficult to get one.”

Ford wasn’t kidding about the two-year clause either. John Cena, a former pro wrestler, tried to sell his GT. The GT was a model that, “even if you had the cash, it was very difficult to get one.” And, when Cena attempted to sell his, the automaker took him to court. The GT resales ban, however, affected very “few buyers.”

Inc. notes that assuming “dealers use the clause (which is meant to protect their interests), it could affect the 200,000 people who have already reserved the Lightning, as well as anyone else who wants one.” Potential buyers will “likely have to wait longer than a year to get one.”

Inc. notes that limiting “resales this is an extraordinary move, but these are extraordinary times for both the car market and the used car market. Ford is making a very large and splashy commitment to EVs, having now made electric versions of its iconic Mustang and its incredibly popular F-150 pickup truck.” Ford CEO Jim Farley has said that the chip shortage “all automakers are struggling with won’t constrain production of the F-150 Lightning—suggesting that the company will pull chips from the production of its internal combustion engine cars if necessary.”

You would have thought, though, that Ford’s announcement last week that the Lightning was finally rolling down assembly lines would have been greeted quite affirmatively. That was hardly the case as social media platforms were jammed with complaints “about how [customers] had been waiting for the non-electric vehicles they’d ordered.”

The potential year-long sales resales ban has been drawing its share of fire, with critics questioning whether it is wise or ethical for the automaker to tell customers what they “can and can’t do with their own” vehicles “after they’ve paid for them.” However, it is very likely those critics are wrong. Ford has been in business for well over a century, and “the company is well aware that if demand for its” products far outstrips “supply today,” the day will come when the reverse is true.” So, the automaker, notes Inc. “is very smart to protect its customers from dealer gouging and both dealers and customers from the automotive equivalent of concert ticket scalpers. Some seem to welcome the move.”

Ford’s Commitment To EVs Is Huge

“Ford is smart, too, in making a big commitment to electric vehicles. The company first started promoting the F-150 Lightning” a couple of years ago when gas “cost less than $2.85 a gallon. Its leaders couldn’t have foreseen the coming pandemic or the changes to the automotive world it would bring. Today, it looks prescient, creating the first large-production full-sized electric pickup to hit the market at a time when gas prices are well over $4, and electric car sales have just overtaken diesel sales in Europe.” EVs, Inc. notes, are the wave “of the future and … they will inexorably take over the automotive market.”

Marc Stern has been an automotive writer since 1971 when an otherwise normal news editor said, "You're our new car editor," and dumped about 27 pounds of auto stuff on my desk. I was in heaven as I have been a gearhead from my early days. As a teen, I spent the usual number of misspent hours hanging out at gas stations Shell and Texaco (a big thing in my youth) and working on cars. It was a straight line to my first column for the paper, "You Auto Know," an enterprise that I handled faithfully for 32 years. Not many people know that I also handled computer documentation for a good part of my living while writing YAN. My best writing, though, was always in cars. My work has appeared in Popular Mechanics, Mechanix Illustrated, AutoWeek, SuperStock, Trailer Life, Old Cars Weekly, Special Interest Autos, etc. You can follow me on: Twitter or Facebook.