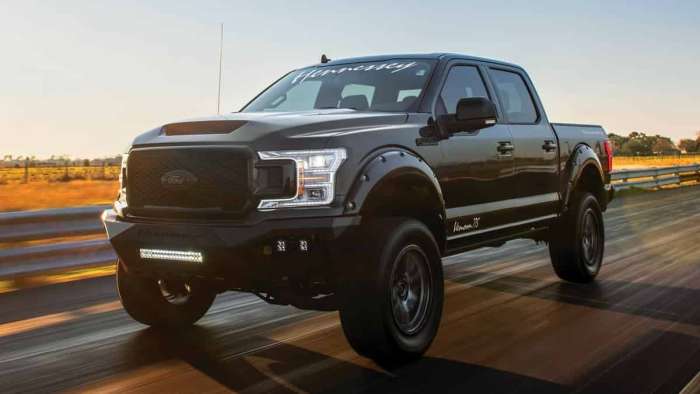 Hennessey Performance Engineering has gone over the top again, this time with its Venom 775 upgrade for the Ford F-150. The Venom 775 adds a cool 400-horsepower to the Coyote V-8 powerplant so that the pickup pushes 775 horsepower and does a 4.0-second 0 to 60.
Advertisement

It there is one thing that is true about motorhead; it is that we all have more than one screw loose. After all, how can you account for people who think it’s fun to torture test a Duramax diesel by pushing the envelope way past its tolerance limits to see when it will barf up its pistons (nothing yet and as I understand it they are well past 800 horsepower and climbing.). Or, how about tuners that take, otherwise perfectly good pickups, graft on a second set of functional rear wheels and then swap out the existing turbochargers on the 3.5-liter V-6 so that the engine pushes out more than 660 horsepower.

The Strange World Of Auto Journalism

In the world of automotive journalism, we have our loose screws rattling around up there as we get excited when the first of the new models begin to show up for review. It’s almost like the old Pavlovian dog tests where pooches barked and became excited when, for example, the right-hand light shone. When the other bulb with no food or treats flashed, and they didn’t receive any food or snacks, the dogs walked away, seemingly disappointed. To see if it was dependent on the light or the snacks, the researchers took the food away and flashed the right-hand light. When the dogs did not receive goodies with the proper bulb lighted, they began to ignore the right-hand light and waited to see if something would be forthcoming with the other light. Sometimes it was there and others not and the pooches became uninterested in lights until the right-hand one shone and food appeared. Then, the researchers took away the food but returned it to the pups when the right-hand light flashed. They were happy, drooling, and wagging. Automotive journos are just like those pooches except that we drool no matter what around new vehicles, whether the light is on or off. About the only thing we have to remember is to keep our drool from staining the finish.

In that vein, then you can hardly expect that when the motorheads on the staff of Hennessey Performance Engineering to leave Ford F-150s alone. Indeed, they were the engineers who grafted the second set of functional rear wheels to another F-150 – a Raptor -- and cranked up the output on the high-output 3.5-liter twin-turbo V-6 as they made a 6X6 Hennessey-Ford VelociRaptor. I wrote about this special pickup recently in Torque News.

This time, though, the tuners at HPE decided it would be a good idea to crank power back into an F-150 and its Coyote V-8. And the result was the new Venom 775 Supercharged Truck. It is quite a feat that has John Hennessey, HPE founder and CEO, enthusiastic. “At Hennessey Performance, we continue to push the envelope … The Venom 775 is the culmination of what” HPE believes the “perfect F-150 should be.” If this is something in which you’d be interested, you had better get on the phone to the exclusive dealer of this powerhouse Brown Lee Ford in Tennessee. And you had better hurry because there are only 100 copies planned.

The base truck was a 2020 F-150, equipped with the Coyote 5.0-liter V-8. First, they tweaked the engine a bit before they added the critical part to this portion of the Venom 775, a 2.9L supercharger. This piece raised the 395-horsepower output of the Coyote to 775 horsepower. Some of the tweaks that the engineering team did to support the power increase included adding an air-to-water intercooler, high-flow induction, a stainless cat-back exhaust, as well as completing upgrades to the fuel injectors and fuel system. Finally, the engineering team conducted a full Hennessey Engine Management Calibration to set things up correctly. The result was a clean 775 horsepower output that enabled the Venom to do a 4.0-second 0 to 60 run with a 12.1-second quarter mile. Indeed, the engineering wizards turned the pickup into a muscular street-fighter that can handle any surface.

To give the Venom the height it deserves, the team installed six inches of lift all around. Also, they installed 20-inch wheels shod in 35-inch Toyo tires. To haul things down from speed after the engine had spooled up, the team installed a set of substantial Brembo 15.1-inch rotors matched with six-piston caliper brakes upfront.

A Ram Air Hood, with matching paint job, completed the hood. Also, a set of Hennessey bumpers front and rear, illuminated with LED lights, finished the overall exterior changes. And, in a nice touch for the driver and passengers, they added automatic drop-down steps for easy access and egress.

Each Venom 775 comes with a three-year/36,000-mile warranty for all of the Hennessey upgrades.