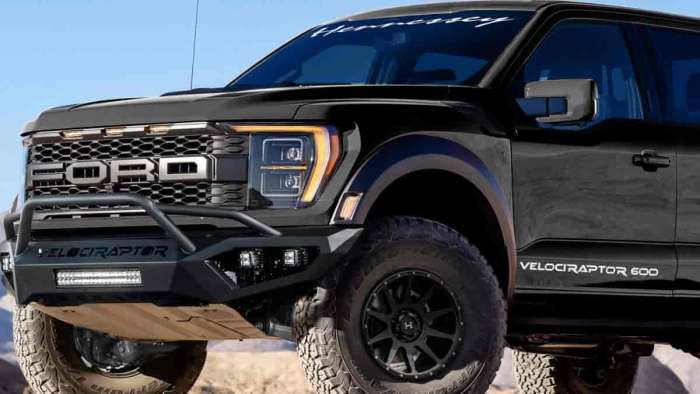 Hennessey Performance has taken the Ford F-150 Raptor and turned it into the 600-horsepower VelociRaptor 600. Here's a look at how it was done.
Advertisement

Although most truck owners wouldn't notice it, foremost tuners like to take a pickup and do a touch here and a tweak there, pull in a bit over there, and voila la, they have taken the truck and turned it into something a lot more powerful.

For example, Hennessey Performance of Texas, a significant tuner of Ford F-150 models like the F-150 Raptor pickup, has been known to do a tweak or two on the basic Ford model and come out with a model they call the VelociRaptor.

The 3.5-liter EcoBoost engine in the Ford Raptor is a turbo powerplant that turns out 450-horsepower, which is quite a lift for the 3.5-liter engine. Imagine adding 150 horsepower on top of that! It is what Hennessey has accomplished, according to the website Marketing Research.

The added horsepower bump that Hennessey injects into the mix is fully 33 percent more power than the standard 450-horsepower available in the third-generation Ford F-150 Raptor.

Hennessey Makes Use Of Familiar Engine>

Hennessey takes advantage of Ford's continuing use of the familiar 3.5-liter EcoBoost powerplant. Using a familiar powerplant makes it easier for a tuner like Hennessey to add the extra horsepower.

To achieve the 150-horsepower bump, Hennessey's VelociRaptor, the tuning team uses a new high-flow air induction system plus an upgraded front-mounted intercooler, plus better intercooler plumbing. The engine management system undergoes reprogramming as the final piece of the completed VelociRaptor.

To ensure that the VelociRaptor delivers 600 horsepower, the pickup undergoes a complete dyno test. The final specs for the upgrade are 600 horsepower and 622 pounds-feet of torque. The upgrade testing includes up to 400 miles of road test work.

Typically, Hennessey adds such upgrades as the Hennessey VelociRaptor front bumper, 20-inch wheels, and a three-inch lift for the suspension. A three-year/36,000-mile warranty covers all work done by Hennessey.