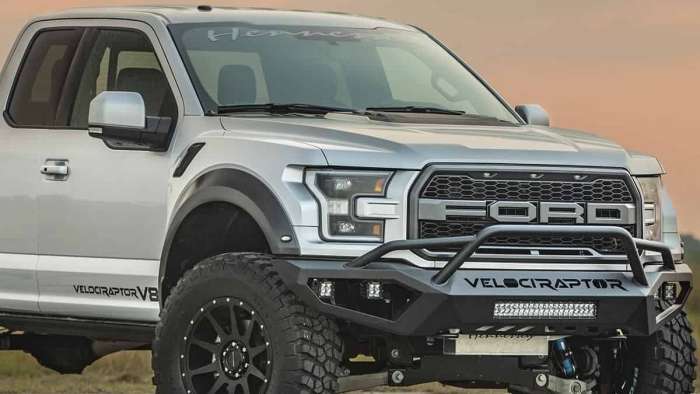 A couple of weeks ago, Torque News told the story of a Hennessey Performance 6X6 VelociRaptor selling for $375,000. Today, we detail another Hennessey VelociRaptor -- a standard 4X4 F-150 -- selling for only $154,995.
Advertisement

If you are a fan of the “Jurassic Park” movie franchise, you probably know a whole bunch of stuff about different dinosaurs. For instance, you probably know that Brontosauruses, the massive water-loving beasts, were herbivores – they ate plants – while Tyrannosaurus rex ate Bronto-burgers because they were meat-eaters or carnivores. And, then there are those “playful” little dinos, the Raptors, or to be more precise, Velociraptors. They are speedy, hunt in packs, and they are supposed to have a degree of intelligence that is incredible – according to the movies.

What Does This Have To Do With Ford F-150 Pickups?

So, what does this have to do with Ford F-150 and other trucks? It’s simple. Did you know that, if you can afford it, you can have your very own VelociRaptor? Okay, it's not a real dinosaur, but it still is a Raptor. In this case, though, it is a Hennessey Performance Engineering (HPE) Velociraptor, outside your house? Of course, it’s not a dino, but it’s still a pretty neat piece of work. HPE, one of the country’s leading tuners, has taken a 2020 Ford F-150 Raptor, the automaker’s nicely mannered desert-runner, and turned it into earth-ripping Velociraptor. The outline of the vehicle has remained the same but, take our word for it; it’s not the same vehicle at all.

Indeed, here’s the rest of the story on this Ford F-150 Raptor. When it arrived at Hennessey, it was your standard-issue Ford F-150 Raptor. It had the stock High-Output 3.5-liter twin-turbo Ecoboost V-6 under the hood. The twin-turbo engine puts out 450 horsepower and 510 pounds-feet of torque. Hennessey’s first move was to pull out the twin-turbo mill and replace it with Ford’s Coyote 5.0-liter Coyote V-8. The V-8 engine was supercharged using a 2.9L Whipple Supercharger. That change alone boosted the horsepower output from what was now becoming a Hennessey VelociRaptor to 750 horsepower.

During the conversion, Hennessey upgraded Ford’s 10-speed automatic tranny. Also, they installed a custom Ford wiring harness and ECU. Also, the engineering team installed an air-to-water intercooler into the engine bay. In the meantime, the team added a high-flow air-induction system as were upgraded fuel injectors. As you can tell, the Hennessey engineering team went above and beyond in its conversion. Indeed, to make sure that the fuel flow was more than adequate to the upgraded injectors, the team installed an upgraded fuel pump system.
Continuing the changes, the team added a stainless-steel cat-back exhaust system. The crew also performed an engine management calibration and put the now-VelociRaptor onto the chassis dyno.

Torque News found this particular “dino” on eBay. The price for this conversion vehicle is – hold onto your steering wheels – is $154,995. Of course, the pricing does include a pair of plates on the dash panel and the engine that indicates tells you where in the limited production plan for these pickups your VelociRaptor falls.

If you’d like to look more closely at the VelociRaptor, go over to eBay and search for Hennessey VelociRaptors. You’ll see at least four of them, including a 6X6 monster going for $375,000. You can contact HPE at 979-885-1300 for more information.