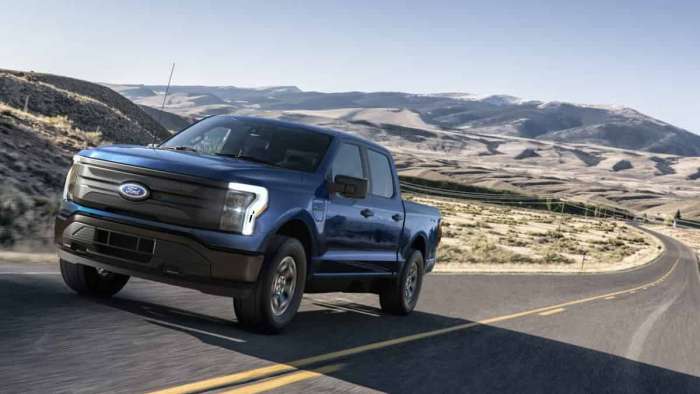 After a long pandemic-induced hiatus, the Chicago Auto Show emerged early this week with the wares of many automakers. For example, Ford shared the F-150 Lightning, its electric pickup, with the public. And, the automaker also showed its Mustang Mach-E, the wildly popular electric. Meantime, the retro -- and popular -- Ford Bronco Brand was also shown off, while the automaker also shared the compact Maverick pickup with the public.
Advertisement

Ford used the renewed Chicago Auto Show, which wrapped up over the weekend, to display its latest wares. The automaker arrived at the auto show when it opened on July 14, with a full slate of its freshest vehicles.

The vehicles included the:

“New vehicle customers are looking for something more than parked cars before deciding what to purchase,” said Raj Register, Ford head of global brand experiences. “We’ve created hand-on experiences that educate and let consumers discover what it’s like to ride off-road in Bronco and Bronco Sport and feel the all-electric performance of Mustang Mach-E. We’ll also have F-150 Lightning so shoppers can see and learn about new features like the Mega Power Frunk and available Ford Intelligent Backup Power.”

At the show, Ford had its latest innovations and models for potential customers to view. For instance, the Ford F-150 Lightning, which had its electrifying debut a few weeks ago, was among the vehicles available at the show, which took place at McCormick Place.

Not only is the Ford Mustang Mach-E a wildly popular model, it is also an award-winner as my colleague Jimmy Dinsmore shows with a story on a major honor.

The electric truck rode into Chicago with impressive technology. Available in the spring of 2022, the all-new electric promises to have the most torque ever in an F-150. The Lightning has features that have never been seen before on an F-150. The features include a 14-cubic-foot-plus (front trunk) plus Ford Intelligent Back-Up Power. The backup power option provides power for up to three days in an outage with an extended-range battery.

Visitors to the show also had the chance to check out the automaker’s all-new compact pickup, the 2022 Ford Maverick. The compact truck, the first standard full-hybrid pickup – will start with a suggested retail of $19,995.

The all-new Maverick reintroduces the compact pickup truck to the public. At the Ford stand, the public was able to view Maverick’s array of innovative tech and flexible cargo solutions. Though it is a compact pickup, the Maverick doesn’t skimp on payload and towing capacity. The Maverick’s payload is 1,500 pounds, and the max towing capacity is 4,000 pounds, enough to tow an average 21-foot boat. The Maverick will be available in the fall. 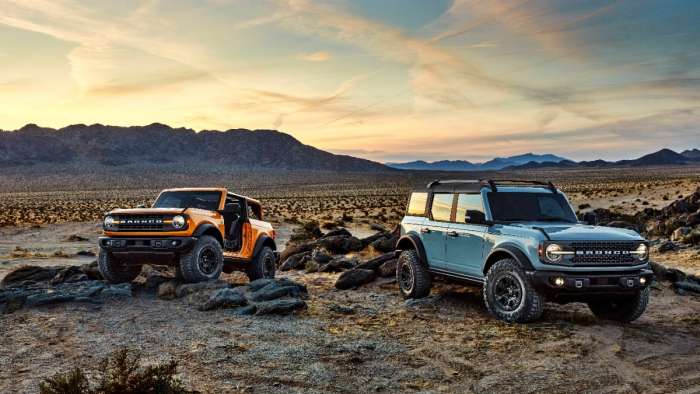 The public also had a chance to look closely at the Bronco. The iconic SUV was part of a 30,000-square-foot Built Wild experience where the public learned about the modularity, connectivity, and the hundreds of accessory offerings available for the Bronco family of vehicles. The Bronco brand includes the full-sized two- and four-door Bronco models, plus the mid-sized Bronco Sport.

The Bronco was part of Ford’s offerings for more than 30 years in the last century. The original Bronco went on sale in 1965, and it remained a popular SUV until the mid-1990s. The Bronco of that era competed against the likes of the International Scout, another two-door SUV, and the Jeep CJ.

To show the automaker’s commitment to electric vehicles, they built an 11,000-square-foot outdoor display termed “Built to Electrify.” At this exhibit, visitors had the chance to experience the full-hybrid Maverick plus a range of zero-emission electric vehicles like the F-150 Lightning, the Mustang Mach-E, and the 2022 E-Transit (available later this year).

The vehicles showcased a variety of features and capabilities only possible through electrification. Visitors had the chance to check out the abilities of the F-150 Lightning. They also had the chance to ride in the all-electric Mustang Mach-E, winner of Car and Driver’s 2021 Electric Vehicle of the Year award.

Visitors also had the chance to check out the frunks on the F-150 Lightning and the Mach-E. The front trunks (frunks) come complete with both of which come complete drains so they can serve double-duty as coolers at tailgates and other events.