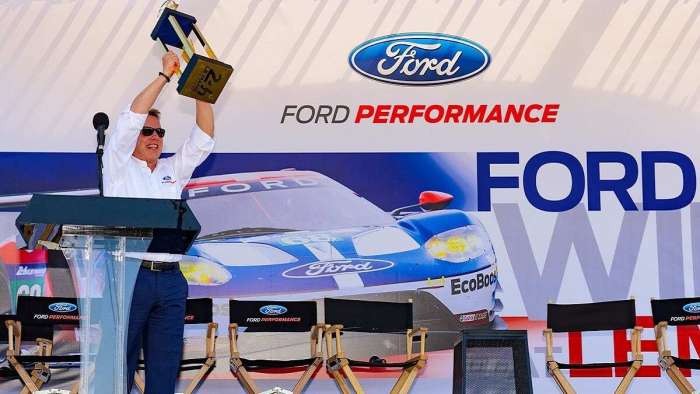 If you are into motoring and racing history, the chances are good that you have seen the 2019 move "Ford versus Ferrari," which detailed the duel between the corporate automotive giants to see who would take Le Mans at the time. It turns out that Ford would win in grand fashion in 1966 with a 1-2-3 win and later wins through 1969. Now, Ford will return to Le Mans in the automaker's seventh-gen Mustang.
Advertisement

In the motoring world, there are probably very few motorheads who haven't seen the most recent performance movie, "Ford v. Ferrari," about the famed automaker duel of the 1960s. Specifically, the film detailed the labors of one of the best drivers of the time, Ken Miles, and one of the best team leaders, Carroll Shelby, as they tried to make Ford into a world-class competitor in such venues as the 24 Hours of LeMans, one of racing's premier enduros.

The primarily real movie documents the insults that Henry Ford had to endure from Enzo Ferrari, which started the competition. Miles was not only a consummate driver but also one of the best automotive engineering test pilots of the era. Battling everything from corporate interference to heat problems, Miles and Shelby put together three copies of the iconic Ford GT40.

Though the GT40 debuted nearly half a century ago, it still holds a special place in the motoring world. Who can forget the 1-2-3 win at the 24 Hours of Le Mans, where the GT40s lined up in a V-formation and motored across the finish line and into racing history?

Indeed, according to sources like Wikipedia, the legendary GT40 would go on to win LeMans four times from 1966 to 1960. The same sources noted that the 1967 version was the only American effort to win the enduro.

Mustang Races Around The World

"Mustang is raced at all the great tracks around the world, but there is no race or track that means more to our history than Le Mans," said Bill Ford, executive chair, at The Stampede, the debut of the all-new seventh-generation Ford Mustang. "It's where we took on Ferrari and won in the 1960s and where we returned 50 years later and shocked the world again. Mustang will go back to Le Mans. Once again, we will Go Like Hell." The Stampede was a herd of Fords that converged on Detroit for the Mustang intro.

Ford famously took the Ford GT 40 to Le Mans 24 Hours beginning in 1964 and triumphed in 1966, sweeping the podium with a 1-2-3 finish. Then, 50 years later, to the day, Ford did it again – winning the Le Mans 24 Hours with Ford Chip Ganassi Racing and the Ford GT, with another Ford GT finishing third. Mustang previously raced at Le Mans in 1967 and 1997.

"The Mustang GT3 will be eligible in 2024," said Mark Rushbrook, global director, Ford Performance Motorsports. "We look forward to seeing Mustang race there."

Tesla Contemplates A New Strategy for China Retail even As Sales Boom
Jay Leno on Elon Musk & EVs: “I Think He Should Get ... Credit"
END_OF_DOCUMENT_TOKEN_TO_BE_REPLACED