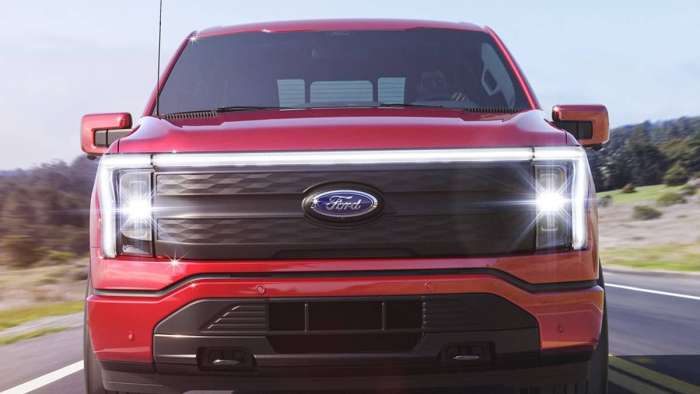 Even as Ford is promising to ramp up production of the highly sought-after Ford Lightning EV pickup, dealers are reportedly slapping major up-charges on the new pickups. Indeed, there is a report of one dealer hitting potential buyers with a fee of $30,000 if they want to be among the first to receive one of the electric trucks.
Advertisement

As the Ford Motor Co. plans to double production of the F-150 Lightning electric pickup to meet the high demand for the truck, dealers are already marking the vehicle up substantially, according to the Ford Authority, which quoted a subredditor group.

The automaker has nearly 200,000 reservations for the vehicle. On Thursday, reservation holders can begin to swap their reservations for orders for the automaker's first election pickup. "With nearly 200,000 reservations, our teams are working hard and creatively to break production constraints to get more F-150 Lightning trucks into the hands of our customers," said Kumar Galhotra, president of the Americas and International Markets Group of Ford Motor Co. "The reality is clear: people are ready for an all-electric F-150, and Ford is pulling out all the stops to scale our operations and increase production capacity."

Ford is very optimistic about its F-150 Lightning. The automaker has promised to ramp up production to meet early customer demand.

Despite this optimism from Ford's leadership, it looks like dealers are using old tactics to raise the price of the popular pickup. The Ford Authority noted that before all the supply chain issues like the chip shortage and such -- sent the prices of new and used vehicles through the roof -- "… hot models were seeing dealer-applied markups for some time after those vehicles were initially launched." The trend reportedly has not only become pretty wide-scale, but it also has "only gotten worse" recently.

Popular vehicles like the Bronco and compact pickup Maverick have been "slapped with markups on dealer lots." And it now "appears that some 2022 Lightning reservation holders" are hearing that their trucks will cost more "than they expected," the Ford Authority noted.

Quoting the ElectricVehicles subreddit, the Ford Authority noted that in a spreadsheet the subreddit put together that is looking at the dealer markups, "…needless to say, it contains some pretty alarming information."

According to the Ford Authority, several 2022 "F-150 Lightning reservations holders have reported that their dealer has informed them that they will need to pay a $10,000 markup to take delivery of their vehicles,"

Indeed, there is a "dealer in Virginia … asking for a whopping $30,000 on top of the pickup's" suggested retail price "for anyone that wants to be among the first 25 customers to bring home an F-150 Lightning."

It is only part of the story, according to The Ford Authority. It reported that "the same dealer informed reservation holders that they will have to put down an additional $5,000 deposit to secure their place in line, which will go toward" the pickup's purchase price.

Here's the clinker from this out-of-whack harmony. If a Lightning buyer decides to back out of their deal, they "will not get their money back."

Of course, as the Ford Authority reminds us, this "is nothing unusual in the world of automobiles." They continue that there are many dealers out there who are "selling the F-150 Lightning at" the suggested retail.

They note this is why it is important to "shop around and consider different dealerships when purchasing a new vehicle, particularly one that's in high demand with "low supply."

The Ford Authority speculated that the automaker would likely be unable to fulfill its 200,000 pre-orders in the 2022 model year, especially if 80 percent of those reservation holders convert them to orders, as Jim Farley, Ford CEO, believes.