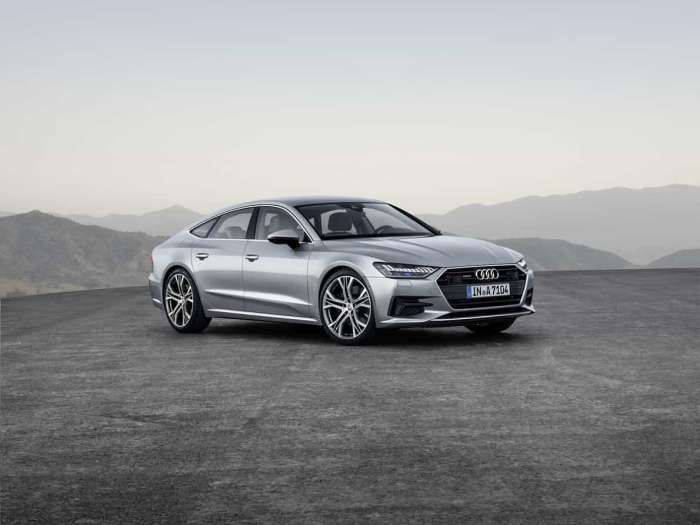 Audi has been improving its A6 and A7 models and now it has turned to improving the S7 for 2019. Though not as breathtaking as its predecessor, the next-gen S7 incorporates changes that are seductively styled.
Advertisement

Recently, while the next generation Audi S7 was out and about for testing a photographer had the good luck to catch it standing still. And, the first reaction was “wow, this car is all ready for production,” because it had its production-ready bodywork installed. Still, there were no real giveaways that this was an S, except for the following, better wheels, quad exhaust outlets and more aggressive bumper lines. Taking whose to their logical conclusions – the A7 wouldn’t have the wheels, exhausts, and bumper lines – we concluded that it was pretty obvious the S7.

The A7 and S7, developed from the A6 sedan, are new for 2019. They are part of Volkswagen’s MLB architecture – one platform serving as the basis for all subsequent cars. The S7 keeps the A7’s new full-width taillight arrangement; its wider hexagonal grille, and more prominent body creases.

The front bumpers have been reshaped and carry more aggressive frontal intakes. Four exhaust pipes poke out from the rear. As to the change from A7 to S7, it is quite subtle.

While Audi has been exceedingly stingy with its powertrain information, some quick engine is evident. The S7 will likely be a Quattro® -- all-wheel-drive – vehicles. And, it is likely there will be a 48-volt “mild” hybrid system. The A7 and A8 already use this system. Want More Info About S7? Here It Is

The Current 4.0-Liter May Appear on the S7

Meantime, an eight-speed automatic tranny could replace the older dual-clutch automatic for a better around-town feel.

So, at this point, you may be wondering why any or all of this matters and you would have a good point? For Audi, it matters because Mercedes-Benz has a growing gaggle of very similar looking “four-door coupes.” M-B Develops A Gaggle of 'Four-Door Coupes." And, while Mercedes might be the first to market with a sexier-than-normal-sedan, Audi perfected the form with its first-generation A7.

New Model Isn’t Breathtaking, But It Is Seductive

And, while reports say that even though the A7 isn’t quite as breathtaking as its predecessor, the successor is quite seductively shaped. The S7 is expected to have a distinct horsepower advantage over the A7. The added power also makes up for some of the style lost in the change to the new model.

The new model should arrive at U.S. dealers in about a year. It’s pricing should be a bit above today’s $82,000 price point.