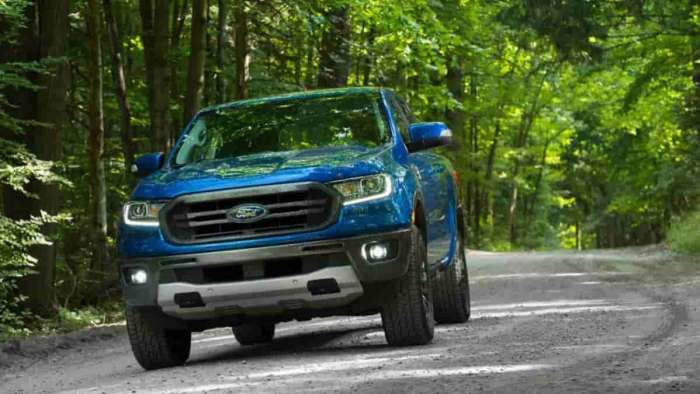 When all is said and done, if you are looking for a good, basic truck, why not consider the base level option? We looked at the base Ford Ranger XL STX and were pleasantly surprised.
Advertisement

Although the Ford Ranger hasn’t taken the intermediate segment of the pickup market by storm, it is still worth a look by truck buyers, hoping to save a bit on their purchases. The Ford Ranger XL still has a suggested list that’s about $8,000 under the top-line Ranger Lariat. Of course, you can add things into the mix, within reason, but by the time you get adding stuff from the Lariat’s options list, you can have a pickup that’s priced well above the $45,000 mark.

As was noted by Motor Trend, though buyers haven’t opted for the base XL STX package in near the numbers that apparently had been hoped, at least buyers haven’t been worried about engine choices and improvements as they moved up the model ladder. Unlike other truck models, Ranger only offers one engine in all its Ranger trucks. This means that if someone were to opt for the baseline model, the motor would be the same 2.3-liter, turbocharged inline-four as in the Lariat. This engine cranks out 270 horsepower and 310 pounds-feet for torque. It is mated to the same 10-speed automatic, as well. This means that the pickup does move.

How well does it move? M-T notes that the base Ford Ranger XL STX SuperCab will do 0 to 60 in 6.3 seconds and run a quarter-mile in 14.9 seconds with an exit speed of 92.9 mph. This performance gives it a leg up on Chevy, GMC, Nissan, and Toyota, which also use four-cylinder engines. Further, the base Ford can haul up to 7,500 pounds, and it has a payload capacity of almost 2,000 pounds.

What is the fully optioned out cost of a base Ford Ranger? Using the 4X2 numbers, the Ranger XL STX carries a base list, with no add-ons, of $24,410. And, when you put in a few things (power steering, power brakes, air-conditioning, and the like – you didn’t think options like power steering would be in the base price, did you?), you have an amount that is still under $30,000 at $29,445. This is considerably less than the $33,000 price that average mid-sized trucks sticker at.

A Good Option For A Work Truck

Put it this way, M-T says, the base Ranger is still a good option for a buyer who wants a basic work truck without anything fancy getting in the way.

Digitaldoc wrote on December 1, 2019 - 11:14pm Permalink
The base Ranger is clearly a performance bargain, with a very capable powertrain for the money. The unfortunate part is the rest of the chassis is mediocre at best, with handling and steering like jell-o. This truck was sold outside the US for many years, and the chassis simply shows it age. Sad that a new vehicle is already begging for a redesign. Would also like to see an optional engine on the higher Ranger trim, like a V-6 turbo from the F-150.
Marc Stern wrote on December 2, 2019 - 8:36am Permalink
The turbo-V-6 would be a nice option as would a new chassis. I have to agree with this. The next new design is the F150 next year and the Ranger will likely be after that but I haven't heard when, just yet.
john mazur wrote on December 14, 2019 - 12:32pm Permalink
funny you didnt use a base truck for the picture of this article...