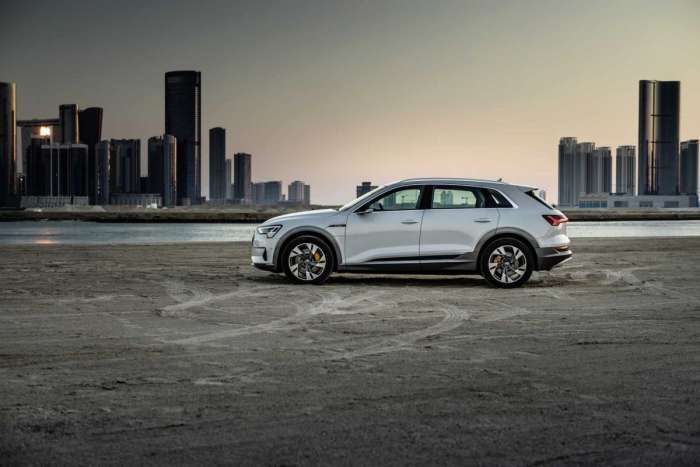 Audi used this year's Geneva International Motor Show to unveil its e-tron Sportback model. At the time of the introduction, the automaker indicated there were at least three other EVs headed for market in the next year.
Advertisement

Amid a sluice-full of pending electric car offerings, Audi rolled out its e-tron Sportback last week at the 2019 Geneva International Motor Show. It is Audi’s next electric car.

’Coupe-Like Version Of The E-Tron’

Said The Motor Authority (TMA) which was on hand for the rollout, the e-tron Sportback “is a coupe-like version of the e-tron crossover SUV." Audi's e-tron called the "new normal" for EVs. A more rakish version of the Sportback is set to reach the public late this year or early next.

Interestingly, even as the automaker was introducing the new vehicle, the automaker discussed said three more electric vehicles (EVs), There’s a version of the Chinese-market Q2 L, the e-tron Gran Turismo, a super-sedan, and the Q4 e-tron. There was also a hint there would be supercar based on the PB18 platform concept unveiled last year. All three will be marketed in the next year.

Moving back to the Sportback, though the prototype was still dressed up in camo, “similarities to the e-tron are evident,” TMA said.” Underpinning the e-tron Sportback is VW’s Group’s C-BEV. The platform is a version of the automaker’s electric module platform (MLB) but oriented toward SUVs, such as Audi’s Q5 and Q7.

The powertrain is reported to be a twin-motor, all-wheel-drive affair that delivers 400 horsepower and 490 pounds-feet of torque. Acceleration is said to be near 5.5 seconds for a 0 to 60 run with a top end of 124 mph. The range is reported to be in the 200- to 250-mile range.

The interior uses a unique trio of screens for the dash. One of them is for instrumentation; the other two are in the center and yield infotainment and climate info. Also, on models that use cameras for the side mirrors, there are two additional screens, one on each side of the dash. This technology hasn’t been approved by the National Highway Traffic Safety Administration yet.

Slated to be built in Audi’s Brussels plant, the Sportback will share the line with the e-tron. Pricing was reportedly to be somewhat higher than the e-tron’s $75,795 base.

Production of the e-tron Sportback will run alongside the e-tron at Audi's plant in Brussels, Belgium. Pricing should come in at a slight premium to the e-tron's $75,795 base sticker.