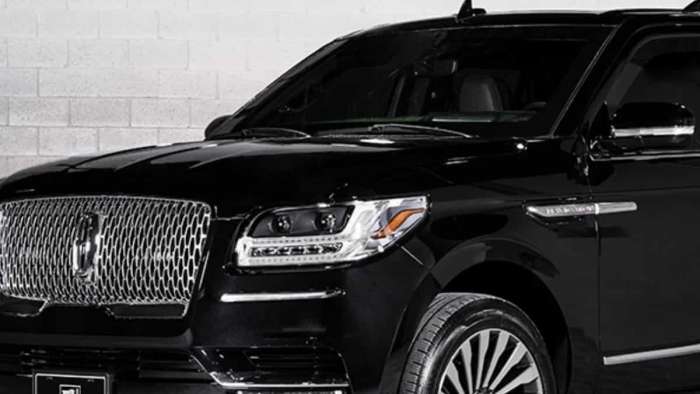 Armored Lincoln Navigator Ls Set Up With Latest In Protection

INKAS, a Canadian armored vehicle outfitter, has chosen the Lincoln Navigator L as its latest armored SUV. Why was it chosen? The Navigator L is long enough and has enough space for various configurations, as well.
Advertisement

If there's one thing that the current pandemic seems to be doing, it is letting me catch up on older movies that I didn't get to see the first time around. For instance, the other day, the movie "Thor" was playing on one of the cable channels.

Armored SUVs End Up In Shambles

At one spot or another in the movie, a trio of black SUVs, owned by one super-secret government agency or another, goes racing off across the desert. In essence, one supposes the Bonneville Salt Flats, though not spelled out.

The SUVs certainly look good, but there's this vast giant robot contraption that blows them to pieces with its flame-breath. Of course, we realize that this robot thingamajig is little more than a 62-foot, monster Bic® lighter.

The walking lighter, since it comes from another realm in the universe and another planet, is more potent than anything else on earth, so in short order, the nice and neat SUVs are smoldering hulks.

Then the walking lighter thingie turns on its real challenger, Thor, and nearly brains our hero, who, unbeknownst to us, is the son of Odin – yes, he of Nordic god fame and is somewhat indestructible.

Daddy is peeved at sonny-boy and took away his magic hammer – he's also in a trance (of all things and seeing what goes on with his favorite son). Since Daddy-god is a forgiving type, who also sees his kid in trouble, he frees Thor's hammer in a rather spectacular fashion – looks like a solid hit with a pitching wedge on a Thor-sized golf course. That said, though, there are a bunch of situations that Thor must face.

In any case, the actors in this movie did an excellent job, and the writing was pretty good. So, why am I presenting a mini-movie review? It's because of news release Torque News received the other day from an armoring firm called INKAS®. They take vehicles like Lincoln's 2020 Navigator L and turn them almost into tanks to protect celebrities, politicians, foreign leaders, heads of state, dignitaries, royals, basically anyone needed luxury SUVp-style transport in a safe package.

And, while the Armored Navigator L is protecting its passengers from bad guys, Saleen is doing a great job with its Ford pickup changes as reporter Jimmy Dinsmore details here.

For INKAS®, the Navigator L offers a modern exterior design matching the firm's many available customizations. Ford pickups such as this Hennessey/Ford special are specialties that show the wide market for Ford trucks.

Built using Lincoln's Navigator L (long wheelbase), INKAS® calls its Armored Lincoln Navigator L an all-around luxury vehicle. I guess it could be if you happen to need the added steel plating that prevents roadside Incdentiary Devices (IEDs) from harming the occupants.

Indeed, the Navigator L doesn't give anything away to other luxo-SUVs n the road today. It does feature a comfortable passenger compartment, equipped with premium leather upholstery, a head-up display, adaptive (LED) headlights (within their confines adaptive headlights work well. As you drive, the lights watch the road ahead and paint issues such as hollows and areas that virtually disappear into the night. Suddenly, those areas of the road ahead appear and with them any potential problems.

For the passengers, there's the complete rear-seat infotainment system that features a 20-speaker Reveal® Ultima surround-sound system. As for comfort, the rear captain-style chairs recline while also offering massage, heating, and cooling capabilities.

"Amidst these uncertain times, INKAS® continues to develop innovative solutions to protect human lives in the way that we best know-how," David Khazanski, INKAS® said. "We are thrilled to add the new armored Lincoln Navigator to our extensive line of luxury vehicles. This vehicle is truly exceptional both in its security features, and it is level of comfort for the drier and all passengers."

The Navigator L features state-of-the-art armoring solutions, including full-perimeter ballistic protection of the vehicle's ceiling and floor, premium multi-layer ballistic glass, upgraded suspension, run-flat tires, emergency lights as well as a siren and public address system to be used in case of emergency. 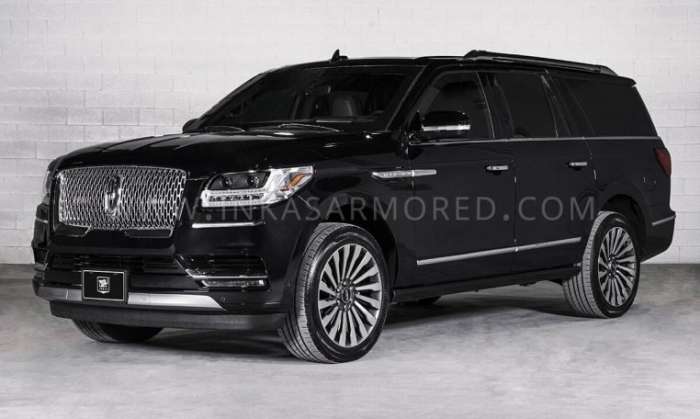