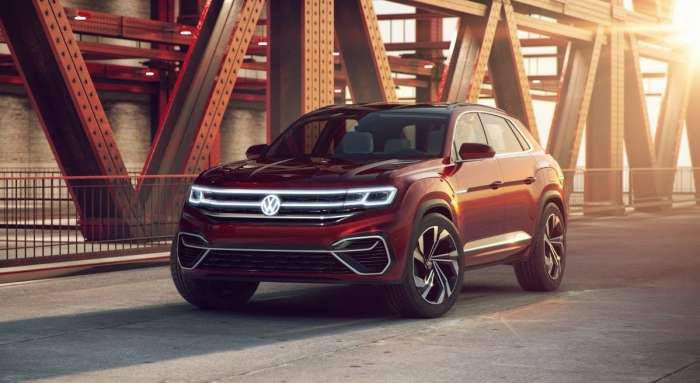 Another SUV/Coupe Will Appear Next Year. Which One Is It?

Volkswagen will bring a variant of the popular and successful Atlas crossover lineup to market next year when the Atlas Cross Sport appears. The new model is a sporty, two-row crossover.
Advertisement

Another “coupe-inspired” SUV will be entering the market next year, the Volkswagen Cross Sport. Hinted at in March, the new SUV is another of the coupes that aren’t coupes, but which the internet insists are coupes.

They Are Just Not Coupes

To explain, somehow in the last couple of years, someone on the marketing side of the auto business of one manufacturer or another decided to recast the coupe as a four-door model. That’s right; an automaker kept on insisting that its four-door was a two-door when it was a four-door. Are you confused? It’s not all that hard to figure out. A coupe has and always will have two doors, that’s it.

No matter how much the industry’s marketing types push and try to make silk SUVs out of beat up junkers, two-door vehicles are still coupes. Though, you wouldn’t be faulted for thinking otherwise if you were to look at press materials from the various automakers. Still, for all that is said, a coupe equals two doors and four. No matter how they wish for it, it isn’t otherwise. (What about two-door trucks or SUVs? In a sense, yes, they are coupes, but – it is a big one – coupes are cars; not trucks.)

With this explanation said, Volkswagen’s latest iteration of its popular Atlas three-row SUV is a smaller, lighter version called the Cross Sport. It appeared on the Chinese website. At the time, the photos showed a rakish two-row SUV. The third row was thrown out in favor of the aggressive profile with a more rakish profile front and rear. Since the photos appeared last March, newer production images have also shown up that illustrate the close-to-production Cross Sport more clearly. VW Atlas Cross Sport To Have Sharper Look.

So, what are the final tweaks like? Some have said the production model loses some of the charm of the concept model. The Cross Sport wears a front fascia with a more standard VW grille and no LED lighting and a more traditional rear treatment.

As for statistics, the website claims the new SUV/crossover is 193.1 inches overall; 78.3 inches wide, and 67.6 inches tall. When you look at the vehicles side by side, the Cross Sport and standard Atlas share nearly identical widths and wheelbase lengths, though the length and height shrink by 7.5 inches and 2.32 inches.

The Cross Sport was termed the “coupe-inspired” Atlas variant, though there is some pushback that would have this a two-door crossover in the first place which could technically make this a “coupe.”

It is more than likely the Cross Sport would share powertrains with the standard Atlas. The regular Atlas is driven by a 2.0-liter turbo-4 that turns out 238 horsepower or a 3.6-liter V-6 with 280 horsepower. There have been indications that a mild-hybrid version might be available. The same is true of a plug-in hybrid.

When it goes into production sometime next year, the competition will be stiff. Among the competitors will be the Chevy Blazer Blazer Will Be One Of Atlas Cross Sport Rivals. and the new Honda Passport Returning Honda To Compete With Atlas Cross Sport. Other, already established competitors, are Ford’s Edge, sold since 2006, and Nissan’s Murano, sold since the early 2000s. Chattanooga is the production site. Production will start early in the year, and it will go on sale later as a 2020 model.