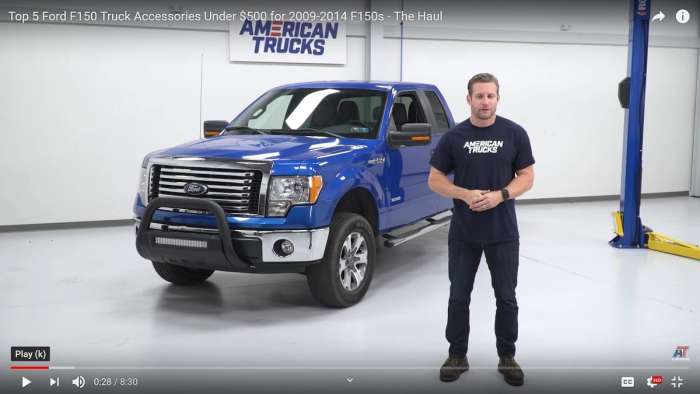 Rather Than Being Mind-Boggled, Here Are Some Interesting Ford F150 Lighting Options

If you own a Ford F150 pickup, it is likely that at some point you will want to upgrade it. We have found that one of first items they think of is lighting. The number of options available is mind-boggling. And, rather than leave you mind-boggled, here are some interesting suggestions.
Advertisement

Americans love their vehicles. It is as accurate today as it has been since the first car or truck buyers put money down on their vehicles 100 years ago. It leads people to order and have installed features that they believe will individualize their vehicles. For Ford F150 buyers, it is much easier to do than it is for Ford Fusion buyers because pickups tend to come through with more installable optional equipment. American Truck (AT) has put together a series of videos to help you choose the proper options for your Ford F150. The videos not only discuss the top brands, but they also talk about how they help you. AT also follows up with installation instructions, too. Last week, in our discussion of the upcoming 2021 Ford F150, we discussed why people opted for various options, including lighting. During that story, we touched heavily on lighting options for the 2021 Ford F150.. Lighting options are among the most popular in personal trucking today.

For example, if you want to upgrade your Ford F150 with a functional addition, you could consider installing a Barricade Bull Bar that combines a small skidplate and specialized lighting. It is a practical addition that enhances your Ford F150, though the skidplate is admittedly not up to handling the big rocks and ruts of heavy-duty off-roading.

One part of the bull bar that will likely be popular with Ford F150 owners is the available specialized lighting strip. As the guys at American Truck said during a video, lighting is often the first option that Ford F150 owners add to their vehicles. Owners often install or have installed roof-mounted or bumper-mounted light bars. The light bars lay lots of light to the in front, which is great for off-roading at night or if the weather turns lousy. The issue with this type of lighting is that bumper-, bed-, or roof-mounted lighting arrays require drilling for proper installation. It’s great to have this type of lighting platform, but, on the other side, it does leave holes when you want to change vehicles and move the lighting over. If you are selling or trading your Ford F150, then you’ll have to think about filling in the holes that are left.

Instead, wouldn’t it be great to have lighting built into a kit so that you don’t have to drill holes to make things fit. The Barricade bull bar kit solves the drilling problem by including a 20-inch two-row light strip as part of the installation. The accessory strip lays down about 10,000 lumens of light which, while it may not be the multiple thousands of lumens offered by traditional light bars, still fills in the area in front of your Ford F150 nicely. The light strip is an excellent addition to a well-thought-out piece of optional piece of gear. Its modes include spotlight and general lighting.

The bull bar itself is installed using predrilled holes provided by Ford. The kit consists of the bull bar and small skidplate for mild off-road excursions; the lighting, wiring, and switch. It is an excellent addition to the front end of your Ford F150. It is available in either black or polished metal for an additional $60. The cost of the Barricade bull bar runs between $260 and $300.

The Ford F150 has been very successful using the turbocharged EcoBoost 3.5-Liter V6 engine. It is the type of engine installation that lets you have fuel economy and power from the same engine. The JLT Oil Separator has one role in life. It sits in the engine and intercepts oily blowby vapor and keeps it from being routed back into the Ford F150’s intake and its PCV system. Without a device like the JLT Oil Separator, the blowby would, among other things, leave an oily residue on the valves. Eventually, the blowby bakes onto the valve in a process known as coking, leading to poor mileage and performance.

It is a small upgrade to your engine that keeps things clean. The great news is that it is under $150.

Here’s a device that many Ford F150 owners install in their vehicles. It is the ReadyLIFT 2.5-inch leveling kit. The kit fills two issues that some Ford F150 have with their trucks. It fixes a problem that people find with a nose-down look. And, it lets you put on beefy wheels and tires when you can afford them. As the Ford F150 comes from the factory, it has a nose-down look that some owners find disconcerting. The ReadyLIFT not only levels out your Ford F150, but it also allows you to put beefier tires and wheels on your truck. ReadyLIFT says their kit will handle up to 35-inch wheels, but the folks at American Truck think that 33-inch tires and wheel are about as good as you will get. The ReadyLIFT kit performs its job quite well.

You’ve probably seen the ads for rubberized floor mats for your vehicle. The floor mats keep snow, ice, and mud off your Ford F150’s carpeting during the winter. The floor mats also keep your Ford F150’s carpets clean and dry. Husky’s floor mats do their job well as they fit into the Ford F150 snugly. They feature a lip that comes up and just about mates with the door sills. They handle the winter’s snowy chores easily. When they are dirty all you need to do is take them out, hose them off and put them back down. The bottom material grips and keeps things snug.

One of the items that Ford F150 owners need is a tonneau cover to protect personal things. For example, if you have small kids and you travel, you need a spot to keep their toys and other paraphernalia safely out of sight, a soft tonneau cover takes car of it. Soft tonneau covers are necessities for most people because hard bed covers are much more expensive.

Be sure the cover is adjustable so you can loosen or tighten it so that it will operate freely in cold or hot weather. Though a soft tonneau cover won’t stand up to determined thieves, it still offers you protection from most others.

Watch news about the Ford F150 Pickups and the possible changes for 2021. Click To Subscribe To Torque News Youtube Channel For Daily Ford and Automotive Industry News Analysis.

The basis of this piece was American Truck’s video, “Best Ford F150 Upgrades For Under $500.” It is another in a series of videos the truck outfitter turns out regularly. The key to this particular piece was our coverage of light arrays on the 2021 Ford F150 a couple of days ago. Torque News discussed truck owners’ lighting needs and how to meet them.

Marc Stern wrote on August 15, 2019 - 9:15am Permalink
If you have any interesting option ideas for your Ford F150, please share them with us by leaving a comment here.