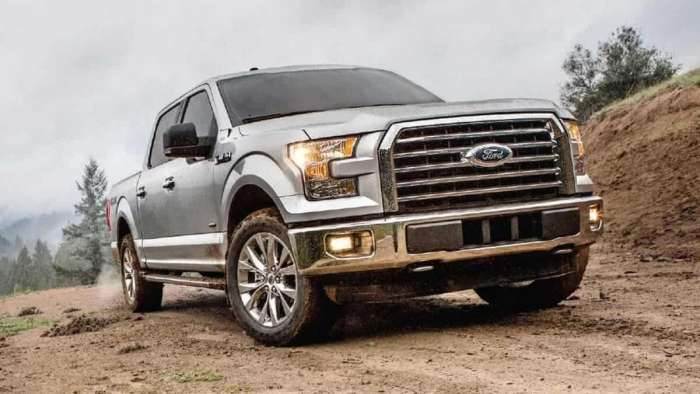 Since 2015, Ford has been making its F-150 panels from aluminum.The experience has been positive. However, the automaker had a reminder for owners and repair shops. There are certain parts that should be original equipment so that body repairs can remain safe.
Advertisement

Just about five years ago, the apartment complex where we live picked up a 2015 Ford F-250 Super Duty pickup to handle things like plowing, gardening, heavy-duty hauling work, and the like.

I read, at that time, that there was more than a little concern about the 2015 Ford F-150/F-250 series. The key concern was its body panels. Unlike other automakers that went in for light, but sturdy, but lightweight super-steels, Ford went a different way.

Ford, whose F-150 is the country’s leading pickup seller, chose to go with aluminum body panels. The idea drew heavy-duty comments from across the auto industry.

Yes, the comments generally said, aluminum panels offer lighter weight and better anti-corrosion properties than steel. Aluminum is better-suited for areas of the country where salt likes to eat metals like steel, even the super-steels used in most pickups.

However, other comments were concerned that aluminum panels might tear like paper, collapse easily like soda cans, and might cost a ton to fix. However, The Ford Authority pointed out, none of those apocryphal things occurred
.
Aluminum-Bodied Pickups Require Added Care

It is true that Ford F-150 panels require some extra special care when they are in the repair shop. But, for the most part, F-150 body panels have been okay. The proof of this is our complex’s F-250 Super Duty, which is in great shape with absolutely no corrosion after five years.

With that said, Ford has apparently had concerns regarding the use of aftermarket rivets and equipment. “The use of aftermarket structural rivets, including self-piercing, blind and solid rivets, is not authorized by Ford,” the automaker said in a statement. “Ford Motor Company considers the use of OEM structural rivets critical to the safety, reliability, and durability of the repaired vehicle.”

The Ford Authority (TFA), an independent site that provides information on the automaker, said that it could easily seem as if the automaker is trying to sell its branded parts. But, there are reasons why Ford makes its claims “specifically as it relates to the differences between its components and other aftermarket pieces,” TFA noted.

Simply, said Ford, there are special rivets “required to properly complete repairs to aluminum Ford vehicles … Each rivet is specific to its location and required to meet structural repair requirements. The Ford repair procedures provide the required rivet location and part number that must be used during a repair.” Rivets aren’t universal, and their “placement cannot deviate from the Ford repair procedures.”

Also, rivet installation tools have to be okayed by Ford. “The SPR installation mandrel determines the proper depth and spread of the SPR rivet,” said the automaker.

Ford has tested and approved six tools for the repair of its aluminum-bodied vehicles. The automaker has also stressed that “blind rivets, solid rivets, and flow drill screws are manufactured to stringent specifications, and therefore are not universal,” said TFA.

Any deviation from official repair procedures for Ford aluminum-bodied vehicles can mean that repairs will be “improper … and key vehicle structural and safety systems” may not function correctly.

Ford warned that this includes aftermarket, recycled, salvaged, and reconditioned parts, said TFA. The site also noted that while these actions are pretty much standard practice today, it is “also potentially bad news for those looking to save a few bucks repairing their aluminum Ford vehicle.”

Marc SternMarc Stern has been an auto writer since 1971. It was a position that filled two boyhood dreams: One was that I would write, and two that I write about cars. When I took over as my newspaper's auto editor, I began a 32-year career as an automotive columnist. There isn't much on four wheels that I haven't driven or reviewed. My work has appeared in Popular Mechanics, Mechanix Illustrated, AutoWeek, SuperStock, Trailer Life, Old Cars Weekly, Special Interest Autos, and others. Today, I am the Ford F150 reporter for Torque News. I write how-to and help columns for online sites such as Fixya.com and others. You can follow me on Twitter or Facebook. Most of Marc's stories can be found at Torque News Ford coverage. Check back again and search for Torque News Ford F-150 news for more F-150 truck news coverage.

Alex Carter wrote on June 11, 2022 - 9:37pm Permalink
My 2017 F-250 was in the shop for body repair and they did not use blind rivets, Is it true that all body repairs Must use the blind rivets for the truck to be back to OEM spec.