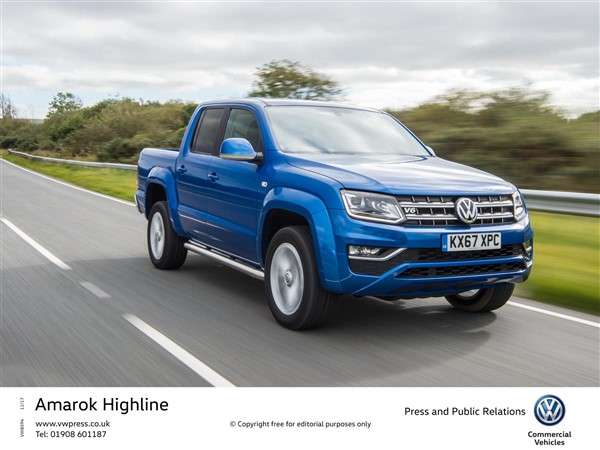 All it would take is one change, and VW could have a competitive pickup

A few months ago, we asked VW why the Amarok isn't offered here. Aside from its diesel power, the automaker told us that it didn't make sense given its marketing strategy. Well, now the pickup was named European Pickup of the Year, 2018 and sales are up as customers are excited. Don't you think that if it was offered in a gasoline version, it might not do well on this side of the ocean? We think so, but, we're not VW.
Advertisement

Earlier this year, I asked a question whose answer still leaves me wondering. I looked at the Volkswagen Amarok, a European pickup that we never see in the U.S. Indeed, I questioned a Volkswagen spokesman about it and, on thinking about it at the time, the answer made sense. But now, I am having second thoughts.

VW has no thoughts of bringing it here

At the time, VW told me it had no thoughts of bringing the six-cylinder mid-sized Amarok here because it didn’t make any sense in its product strategy. That strategy emphasizes sedans and crossovers and leaves other models, like pickups and vans, out of the picture. As was explained to me at that time, with all of the robust and already-established competition, it didn’t make sense. You see, the automaker would have to go about establishing the new line, build it up and hope it would catch on with the public. Indeed, there’s a small window for fresh models today, especially in nearly-saturated markets. However, I think the Amarok might do better than the automaker thinks.

The reason is simple: any time a new vehicle can win over a group of automotive journalists on its first time out, then it must have something going for it beyond even what the automaker thinks. You see, the Amarok, made by VW’s Commercial Vehicle subsidiary in Europe, has been awarded the “International Pick-up Award 2018 on the vote of a panel of automotive journalists.

Dr. Eckhard Scholz, chairman of the brand board of management of VW Commercial Vehicles, told those gathered at the presentation in Lyon, France, VW is “very grateful to have received the IPUA 2018 and feel honored by the decision of the international expert jury.” The second-generation pickup “is more than just pure luxury and lifestyle.” The automaker, he said, “listened to what customers want and have been able to achieve more power, more torque and better capability for deployment on any terrain.”

The jurors called the Amarok the epitome of “work hard, play hard,” a core element of the pickup segment. Jurors labeled the Amarok a “top pedigree workhorse.” The jurors called out the clear design, fit and finish (workmanship) as the core of their decision. For example, the size of the double-cab with room for five – the benchmark of the segment – impressed the judges.

The judges were also impressed by the Amarok’s modern design. And, they also liked the ergonomic (ergoComfort) driver and front-passenger seats. Also, the unique eight-speed automatic and V-6 powerplant were noted by the judges.

The jurors, in their remarks about the diesel-driven pickup, called out the refinement and flexibility of the 3.0-liter turbodiesel powerplants available. They also lauded the “engine’s refinement” and flexibility which sets “a new set a new standard in the segment.”

The second-gen Amarok has been a hit with customers. Through October, VW Commercial has already sold 65,200, up from 57,600 units last year, or a 13.2 percent hike.

One change that will have to be made before the Amarok might go on sale in North America is in the powerplant department. As noted, the Amarok is a diesel-powered vehicle. Following VW’s experience with Dieselgate in this market, it is more than likely that it would be a bit gunshy about bringing in a new diesel vehicle. However, VW does have a good, turbocharged gasoline-powered 3.0-liter V-6 available that might just make a good substitute for Europe’s turbodiesel. With that one change, though, I think Amarok could do well here and give VW another competitive product in a hot, high-profit market. Granted it is my opinion, but I think it might just work for VW and its customers.

Source: Volkswagen, Van of the Year