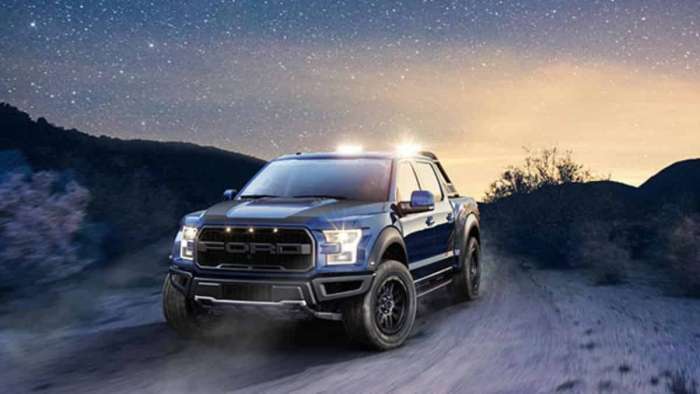 For 2020, Roush Performance has added some exciting tweaks to its Raptor upgrades. The tweaks include a new set of front brakes and exciting interior and exterior trims.
Advertisement

For the last decade, the top performer in the Ford F-150 lineup has been the Raptor. From the start, the Raptor was a powerhouse.

On the one hand, it was a street-performer that other major manufacturers weren't matching. And, on the other hand, it was an honest-to-goodness desert racer, right from the factory. Jimmy Dinsmore, one of Torque News' top Ford correspondents, discusses the 2017 Raptor, one of the best Fords made.

For the first several years, the Raptor's standard powerplant was Ford's Coyote V-8. It's a great engine, but it did have its limits.

The Coyote V-8 also powers the automaker's famed Mustang. As the Mustang's powerplant, the compression ratio is higher than the F-150. It means that the ultimate top end in the F-150 is lower than the Mustang.

As used in the F-150, cam profiling is milder than that of the Mustang. It is another reason the Coyote V-8's performance is mild as compared to the Mustang.

As the 2019 model year dawned, the Raptor underwent a significant change in its powerplant, moving from the Coyote to a V-6. Though the engine is smaller than the 5.0-liter V-8, the now-standard 3.5-liter Ecoboost V-6 puts out more power than the Coyote.

Then there's the Roush Raptor, offered through authorized Roush/Ford dealers, which takes Ford's Raptor and adds features that make a great pickup even better.

For example, the 2020 version of the Roush Raptor uses a front-brake package from Alcon. The front-brake package allows drivers to enjoy the better stopping power than the factory package. The Alcon brakes use black calipers and upgraded rotors and pads.

The next optional feature is the wheels. The wheels are Roush-designed 18-inch satin gray split-spoke wheels that come with integrated black trim rings and an extra set of red-trim rings, which gives you the option of changing the look of the wheels.

The wheels wear a set of all-terrain 35-inch General Grabber™ A/TX Tires. The tires provide the Roush Raptor with the ability to go offroad while also providing a smooth ride on the road. Jimmy Dinsmore proves that you don't have wait for the Raptor to have a Ranger Raptor.

Enhancing its performance look and feel, the Roush Raptor uses an axle-back exhaust system with five-inch tips. The exhaust system gives the Raptor the "Roush" sound. The following video illustrates "the sound."

Indeed, no detail was too small to overlook from the silver Roush branding on the brake rotors to the etched Roush "R" logo in the exhaust tips.

The Roush Raptor provides an upgraded interior using premium black leather with red stitching and suede bolsters. The bolsters keep you in place during trips offroad.

The interior also features several other standouts looks that include the Roush gauge cluster, serialized interior badges, and integrated puddle lamps that light up the ground as you enter or exit the cab.

The Roush Raptor has several touches that set it apart. For example, there's the optional Roush Chase Rack with dual 10-inch light bars that give the pickup a Baja-inspired look. Since the rack sits well above the cargo bed, you don't lose hauling space.

The light bars – 7,290-lumen affairs – feature translucent black enamel lights. To extend the longevity of the LED lamps, there is an integrated thermal management system.

One option that adds to the look is the retractable bed cover that opens or closes in seconds with ease.

A no-drill option, all it requires is a twist of a knob, and the cover retracts, securing cargo so that it is out of view.

If you choose bed cover is selected, drivers can opt-in for a cargo manager that will hold things in place as you drive. Two more exciting options include the Roush off-road utility kit and a console vault for additional secure storage.