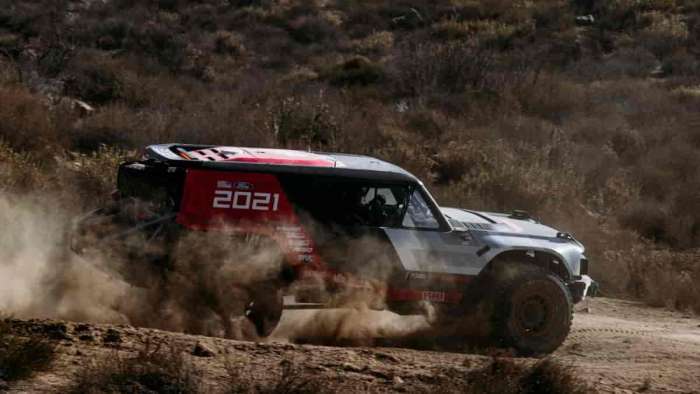 Pushing the Bronco R through the unrelenting landscape of Baja California, the Ford driving team was second in its class as the prototype did the race in about 32 hours.
Advertisement

With its many classes, the Baja 1000 has been the epitome of the "run-what-ya-brung," wind-in-your-teeth off-road classic. The Baja had its beginnings in the car-crazy dune-buggy racing of the California beach scene of the 1960s.

It begins in the upper part of Baja, California, and then snakes its way through trackless back-country trails for 1,000 miles (or close to it, depending on weather). In the early days, many participants put on their helmets, and they headed south. Those early races found more than one vehicle (motorcycle, dune-buggy, ORV-4X4) smacked-out in one of the many obstacles that the course threw in the way of operators. Those vehicles that survived the early Baja enduros gave new meaning to off-road racing to the participants who were glad they made it. My colleague Jimmy Dinsmore discusses this year's Baja 1000 in depth.

This year, Ford took on the Baja enduro with the same Bronco R Prototype that DNF'd (didn't finish) last year. The story was quite a bit different, as well, this year. The Bronco R Prototype, piloted by Cameron Steele, Shelby Hall, and a team of veteran off-road racers (Johnny Campbell, Curt LeDuc and Jason Scherer), finished second in its class time just over 32 hours. The race adds to Bronco's storied history at Baja, dating back to 1967.

Ford had another entry in the enduro. A pre-production 2021 Bronco two-door Outer Banks™ series with Sasquatch™ off-road Package also made its first appearance in the desert. The two-door ran in support of the Bronco R Prototype. 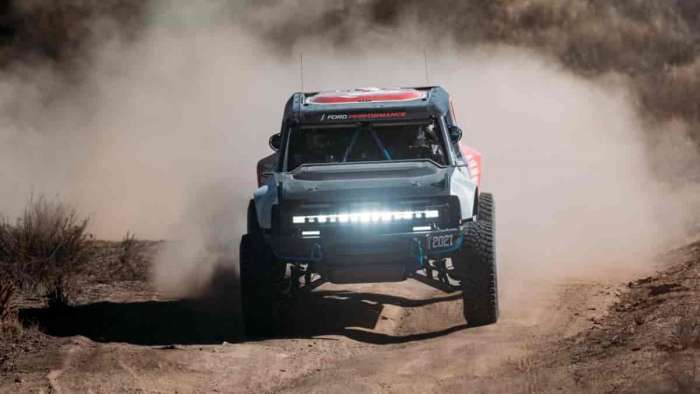 The Bronco R Prototype ran in Class 2. There was one other entrant. The other vehicle running in Class 2, was the S.C.G. (Scuderia Cameron Glickshen) entry. The S.C.G. did the run in a tad over 27 hours. Overall, the S.G.C. entry, driven by Luke McMillin and Larry Roseseler, finished 42nd. It was first in Class 2. Luke McMillin is the son of multi-time Baja winner Mark McMillin.

Known as the 53rd SCORE-International Baja 1000, the Bronco R Prototype put to the test Ford's 2.7-liter EcoBoost V-6 and the automaker's 10-speed automatic. The Bronco R Prototype served as the testbed for Ford's Bronco Built Wild Extreme Testing regimen. It also served as the testbed for the final Baja Mode calibration for the Terrain Management System™ with G.O.A.T. (go anywhere) Modes on production versions.

"When Bronco returned [to the Baja 1000] we said it would follow in the legacy of the first-generation Broncos that forever changed the off-road landscape – and today's finish demonstrates we're continuing the 'Built Wild' pedigree of Bronco," said Mark Rushbrook, global director, Ford Performance motorsports.

Before last weekend's successful 2020 outing, Ford has had an enviable history in the Baja. The successful finish underscored the Bronco brand's performance legacy at Baja, which includes the first-ever overall production 4x4 class win in 1969 Baja 1000 – a feat no other manufacturer has accomplished since.

The race had its beginnings in the 1960s when a bunch of beach racers got together in a "run-what-ya-brung" contest that put every vehicle on the course to the test. You may remember images of V.W. desert racers challenging beach buggies (also V.W.) while full ORVs, like the Ford Bronco, rocketed past vehicles that managed to find holes in the course or rocks or sand.

The unrelenting Baja 1000 tests each entry to the limit. It has always been a tough race to win. However, Ford did win the first in a factory-backed Bronco. It was quite a feat for a vehicle that had only rolled out of the clay shop in 1964 and went on sale in 1965.

Ford is the Official Truck and S.U.V. of SCORE-International Off-Road Racing and lead sponsor of the SCORE World Desert Challenge Series, which includes the 2019-22 SCORE Baja 1000 races. Ford is also the official vehicle of the Ultra4 King of the Hammers competition. Together, they underscore Ford's commitment to off-road motorsports and serve as a platform to develop the Bronco brand and connect with off-road enthusiasts.

Marc Stern has been an auto writer since 1971. It was a position that filled two boyhood dreams: I would write, and two that I write about cars. When I took over as my newspaper's auto editor, I began a 32-year career as an automotive columnist. There isn't much on four wheels that I haven't driven or reviewed. My work has appeared in Popular Mechanics, Mechanix Illustrated, AutoWeek, SuperStock, Trailer Life, Old Cars Weekly, Special Interest Autos, and others. Today, I am the Ford F150 reporter for Torque News. I write how-to and help columns for online sites such as Fixya.com and others. You can follow me on Twitter or Facebook. Most of Marc's stories can be found at Torque News Ford coverage. Check back again and search for Torque News Ford F-150 news for more F-150 truck news coverage.