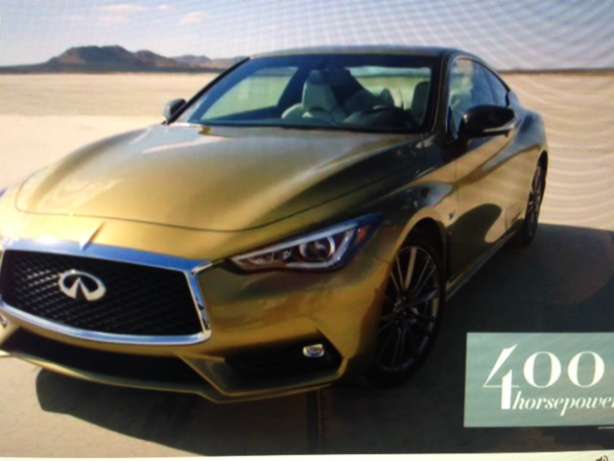 Why Infiniti believes this Q60 could be your fantasy car

The Neiman Marcus Christmas Book is out and it is offering customers the chance to buy a Neiman Marcus Limited Edition Infiniti Q60. Only 50 are being made and they went on sale at noon today.
Advertisement

Neiman Marcus and Infiniti are promising a very special head- turner of a vehicle as this year’s fantasy car. Only 50 are being produced, in a stunning gold paint called “Solar Mica”.

The Infiniti Q60 Neiman Marcus Limited Edition boasts that its twin turbo-charged V6 engine will pump out 400 horsepower and 350 lb-ft of torque. The limited edition model is based on the ultimate Red Sport 400 version of the 2017 Infiniti Q60.

The Neiman Marcus version comes with a number of exclusive upgrades including “Exclusive carbon fiber fender vents, fog-light finishers, mirror caps, and rear spoiler. Gleaming red brake calipers. Glorious white, leather-appointed, and deeply bolstered sport seats and interior. A matching white leather weekender bag, complete with the car's VIN number on a unique plaque in a special compartment inside, made expressly for you.” Each vehicle also comes with a letter of authenticity. It is equipped with a 7-speed automatic transmission with paddle shifters.

Neiman Marcus is famous for creating spectacular special edition vehicles as gifts for every Christmas Book. They have featured everything from Ford Mustangs and Ford Thunderbirds to other nameplates.

The limited editions are always luxury collectors. Is the Gold Solar Mica paint and matching luggage enough to make the 400 horsepower turbo-charged chariot your dream car? It will be interesting to see how quickly they sell out!