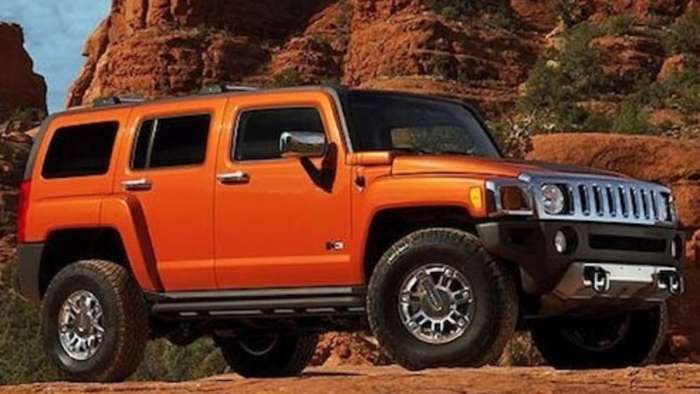 Why GM Will Bring Back Hummer as a GMC Electric Pickup

We should know within a month what the new incarnation of Hummer should look like. GM is expected to unveil its new electric truck during the Superbowl, February 2, 2020!
Advertisement

General Motors has huge plans for its iconic brand Hummer. A recent report suggests that GM plans to bring back the Hummer name as a group of electric vehicles that will be sold as GMCs. While GM isn’t commenting at this point, the first of the Hummer vehicles, an electric pickup, is expected to debut during an ad during the 2020 Superbowl, early next month.

According to reports, basketball superstar Lebron James has signed on to help promote the Hummer pickup, which could hit the market as a 2022 model. Tesla and Rivian are also working on electric pickup models. Some Ford F-150s have been spotted with what appear to be electric charging plugs. Ford also has an all-electric SUV called the Mach-E already in the pipeline.

The Hummer news was first reported in the WSJ. However, as part of its contract settlement with the UAW, last fall, GM promised to invest billions in the Detroit-Hamtramck plant to build future electric vehicles. The plant built GM’s first commercial electric vehicle, the Chevrolet Volt. Most recently, it has also built Cadillac and Buick sedans. Chevrolet also builds the all-electric Chevrolet Bolt.

As I have previously reported, GM has been quietly working behind the scenes on building its electrification platforms. GM has been working in partnership with the military to build pickups powered by fuel cells. One truck, the Chevrolet Colorado ZH2 is already being tested by the Army. The fuel cell powered trucks would help the military generate electricity in remote areas and reduce the needs for remote refueling. The vehicles would also be quieter, so the enemy may not detect the trucks as easily.

General Motors phased out the Hummer stand-alone brand in in 2010. During its bankruptcy crisis, GM had an agreement to sell Hummer to a Chinese brand called Tengzhong Heavy Industrial Machines but the deal fell apart.

Hummer is an iconic name. It conjures up images of a rugged vehicle that is built to take on difficult terrain. Consumers have been reluctant to view electric vehicles as rugged or highly capable. Giving the new pickup a respected name may help build up its image. It is theorized that the first Hummer electric vehicle could be a smaller pickup similar to the 2020 Jeep Gladiator. We’ll have to see what GMC unveils during the 2020 Superbowl on February 2nd.

See you in my next story discussing how the 2020 Jeep Gladiator blew away the competition and earned the Truck of The Year award.

Follow Mary Conway at @maryconwaymedia and send her car news tips for future stories. Most of Mary's stories can be found at General Motors and RAM reporting on Torque News. Search Torque News Hummer for more news coverage on Hummer by our reporters.

DeanMcManis wrote on January 13, 2020 - 1:37pm Permalink
Hummer is an interesting brand to revive as an electric vehicle. Certainly Tesla's Cybertruck, Rivian's EV pickup, and Bollinger's pricey BEV have all gotten big press lately, highlighting the fact that EVs can be very capable on and off road vehicles. The tricky part for Hummer is that even though they were well known for being very capable off road vehicles, they were equally well known for being very inefficient, and had become icons of gas guzzling vehicles. My next door neighbor owned a Hummer H2 and averaged 9 MPG. Having a new electric Hummer would redefine the brand, and open many markets for GM. Most likely it will be AWD and hopefully have a big battery, to provide an even longer EV driving range than GM's long range Bolt.
Dave wrote on January 28, 2020 - 5:19pm Permalink
a complete waste of time.

LG's New EV Battery Plant Is a Welcome News for Tesla
Tesla Giga Berlin's New Hurdle: It's Not Only the Gov't, but Now Tesla Itself
END_OF_DOCUMENT_TOKEN_TO_BE_REPLACED