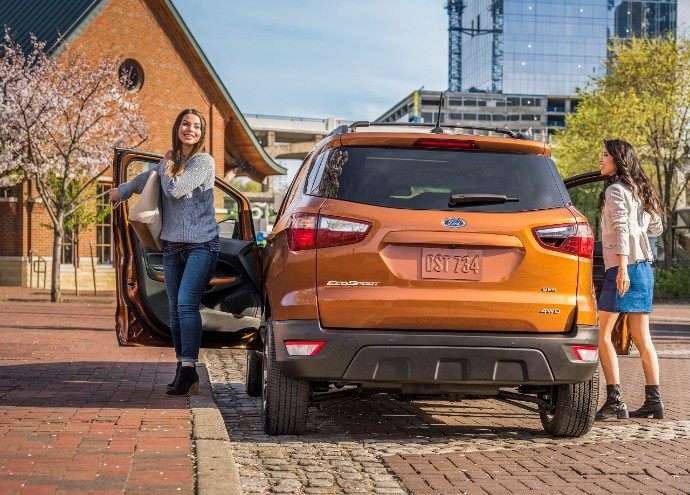 Why Generation Z loves subcompact SUVs like the 2018 Ford EcoSport

Five years ago, very few people knew what a subcompact SUV was. Now it is one of the faster growing segments, due in large part to a new crop of car buyers. Move over millennials, Generation Z buyers like SUVs, too.
Advertisement

Auto makers are still reeling from the effects that millennials have had on the industry, many don’t want to drive and don’t care if they get a driver’s license. Gen Z, is however providing a little bright spot. The Gen Zers seem to like the subcompact SUV and are making the tiny SUVs, like the 2018 Ford EcoSport, one of the fastest growing auto segments.

More than five years ago, most people couldn’t name a subcompact SUV, much less consider buying one. The world has changed since then, some cars are getting smaller and traffic in most cities is more and more congested. Many drivers want a smaller vehicle and nearly everyone loves an SUV.

Many Drivers Want the Handling and Cargo Room of an SUV

I remember when the Buick Encore debuted at the North American International Auto Show, in Detroit. Mary Barra, who then was a rising star at the company and is now Chairman and CEO, told me that they believed there would be a huge shift in future buyer preferences. They were designing the luxury appointed Encore with all of the bells and whistles that young people and older drivers could want. GM forecast that there would be a demand for much smaller vehicles that handled like an SUV and had plenty of cargo room. The Buick Encore was one of the first. Now there are nine subcompact SUVs in the segment, including the Ford EcoSport, Nissan Rogue Sport, Jeep Renegade and Subaru CrossTrek.

Many of the subcompact SUVs are affordable enough that young people can consider buying new rather than driving a used car. Kelly Oswald was one of the first to buy the 2018 Ford EcoSport. “I’d never heard of EcoSport, but I loved it the minute I saw it. I went in looking to buy a used car. I didn’t expect there to be an affordable option to buy a new car.” Owald is a 19-year-old college student in Baltimore.

The primary draw may be the connectivity in a newer vehicle. Gen Z drivers were born after 1995. According to Ford’s statistics, they are the first generation to grow up in an on-demand world. Ford says that 73 percent of Gen Zers connect to the internet within an hour of waking up. They want to be continually connected to Wi-Fi and Bluetooth while in the vehicle and 35 percent of them say the infotainment system is the most important component when selecting a vehicle.

“To Gen Z buyers, connectivity is everything,” said Karen Sullivan, Ford EcoSport brand marketing manager. “Their car serves as an extension of their phone and their home, and we’re seeing an exciting response from these young customers to our all-new EcoSport.”

After growing up in a connected world, Gen Z now expects their vehicles to have in-vehicle WiFi and smartphone app compatibility with the infotainment systems. Most of the subcompact vehicles, like the 2018 Ford EcoSport, have premium audio systems and touchscreens.

The subcompact SUVs are increasingly drawing baby boomers, as well. Many want all of the technology that they used to have in their larger vehicles, plus they want the safety and handling of an SUV.

Despite being equipped with the latest in technology, the little SUVs, are affordable. The Ford EcoSport starts around $20,000. Gas mileage is always a big question. The EcoSport has a 1.0-liter EcoBoost® engine and gets an EPA-estimated 28 mpg combined rating and a range of up to 381 miles per tankful of gas. You can check out the MPG ratings of all of the subcompact SUV competitors at FuelEconomy.gov.

Flor wrote on May 23, 2018 - 12:29pm Permalink
Amazing! This blog looks exactly like my old one! It's on a entirely different topic but it has pretty much the same page layout and design. Excellent choice of colors!wholesale jerseys