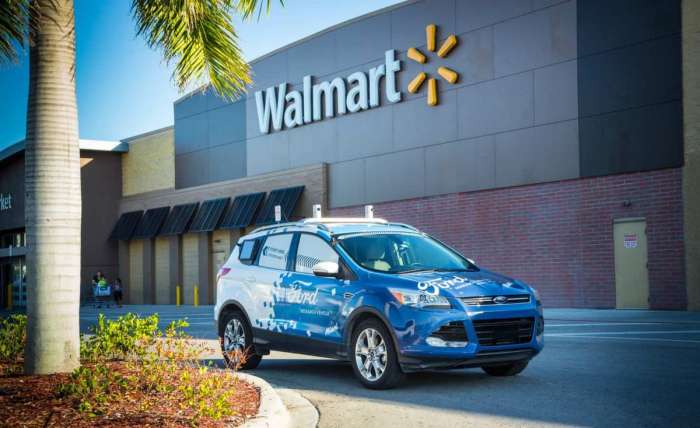 Why Ford is Teaming Up With Walmart on Self-Driving Vehicles

At first, it sounds like an odd partnership, Ford teaming up with Walmart. Ford is exploring ways to use self-driving vehicles to deliver purchases from Walmart. It could be a big win for both companies.
Advertisement

As Ford is scrambling to get its self-driving programs up and running, it is recruiting some interesting partners. Ford is teaming up with Walmart and Postmates to explore using Ford’s autonomous driving test vehicles to deliver purchases from Walmart.

Ford is Experimenting with Food Delivery

According to Brian Wolf, who leads business development for Ford Autonomous Vehicles, Ford believes self-driving vehicles can expand affordable access to transportation and goods delivery. Ford is already collaborating with both national and local companies to understand how it can improve goods delivery through the use of self-driving vehicles, working to transport tacos, floral arrangements, dry cleaning and a number of other items. Now, Ford believes it’s time to explore how grocery delivery can expand access to fresh food and other retail items for people all over the country. Ford is already testing its self-driving vehicles in Miami-Dade County, so that is where it will start delivering items from Walmart as well.

According to Wolf, “Through this collaboration, we are exploring how self-driving vehicles can deliver many everyday goods such as groceries, diapers, pet food and personal care items. Enabled by Postmates delivery as a service, we were able to quickly set up a pilot program that explores how our self-driving vehicles can complement Walmart’s existing delivery offerings. Since Postmates is already a partner of both Ford and Walmart, the companies are able to utilize Postmates’ infrastructure to get this offering up and running quickly.”

Ford’s autonomous vehicle testing still uses real back-up drivers in the vehicles, but they simulate the autonomous experience so they can learn about the potential problems and pitfalls with the equipment, as well as the software.

What Ford Will Learn From Walmart

Over the next couple of months, Ford will work with Walmart to identify what goods can be transported, and what type of vehicle would be needed to make it economically feasible. Ford is testing vehicles that have multiple compartments so the vehicles can transport separate orders. Users will be texted a code to unlock the compartment that contains their order. Working with Walmart will help Ford determine how much of the vehicle would need to be refrigerated, or how large the typical delivery order may be. Ford will be exploring different vehicle configurations or modifications that they could make to meet people’s needs, especially to accommodate perishable goods.

Walmart is aggressively competing with Amazon and Whole Foods for customers so it is looking for affordable ways to deliver fresh foods.

Wolf says “We’re confident that working with Walmart will strengthen our effort to successfully deploy self-driving vehicles in a way that people actually want to experience — whether they’re ordering takeout, groceries or anything else they might need.”

Ford says it has already made over 1,000 deliveries as part of its autonomous vehicle test program. It does not indicate what sorts of problems it has encountered or how many times the back-up driver has had to intervene to keep the vehicle from having an accident. Ford is believed to be lagging in its development of autonomous vehicles, behind companies like General Motors and Tesla. However, the Dearborn, Michigan, based automaker is investing heavily in its autonomous vehicle programs trying to bring them up to speed.