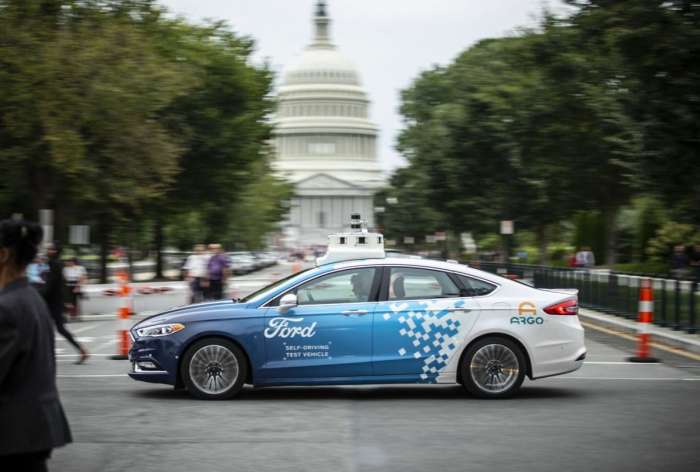 Why Ford is Taking its Self-Driving Vehicle Testing to Washington, D.C.

Ford is taking its self-driving testing to the government's nerve center, so it can be highly visible to the people who may set the guidelines for the industry going forward.
Advertisement

Ford is perceived to be lagging behind Tesla and General Motors in the race to market self-driving vehicles. Where will the company get the most visibility in the technology race? The company announced that it will take its self-driving testing to Washington, D.C., where it will be routinely seen by the decision-makers when it comes to the industry’s future.

Ford released information about its expanded testing today. Buried in one of the last paragraphs of the release attributed to Sherif Marakby, CEO of Ford Autonomous Vehicles, is the line that is most telling. “It’s important that lawmakers see self-driving vehicles with their own eyes as we keep pushing for legislation that governs their safe use across the country.”

The release was also published as an article in the online forum called Medium, which monitors developments in the autonomous driving arena. Marakby says that “Just like guiding a bill through Congress, establishing a self-driving vehicle business requires a lot of coordination. Not only do self-driving vehicles need to operate safely and reliably, but they also need to work in concert with the businesses, people and cities they serve. On top of all this, they must operate within an ecosystem that supports their operation and maintenance.”

Ford is continuing to work on the different fronts and conducting testing in Detroit, Michigan, Pittsburgh, Pennsylvania and Miami, Florida.

The Blue Oval is also expanding its testing program to Washington, D.C., by first establishing a self-driving business in the district.

Ford says it is working with the Washington, D.C., mayor to decide how the testing program can be deployed across the various neighborhoods that make up the district. Ford is examining the best ways to create jobs and provide vehicle and delivery services during the testing phase.

Much like the Ford autonomous vehicle testing in other parts of the country, it appears that Ford will begin the tests with drivers on board to make sure there are no problems. “We are looking to train a roster of vehicle operators, who will be responsible for safely operating and monitoring our test vehicles on public roads and on closed courses throughout the development process.” Ford hopes to have commercial service up and running in 2021. The company isn’t saying if that business will focus on ride-hailing services or delivery services or both.

Ford says that its partners at Argo AI already have advance vehicles on the D.C. streets, mapping the roads as the first step in developing the self-driving testing.

Watch Ford Digit: Robot Delivers a Package To Your Doorstep

Ford is also promising to train residents for auto technician careers that will be involved with the self-driving technology.

“Acting now in preparation for the future is necessary so that we aren’t caught flat-footed as autonomous technology gains mainstream adoption. Part of that means making sure all residents have the chance to learn new skills, and we are committed to helping identify new jobs for communities as self-driving vehicles take to the streets.”

Ford says that the D.C. market provides an enormous opportunity to learn how a comprehensive self-driving business could function in a big city. The test fleet would have to function with a huge number of commuters. The city has millions of other visitors, juggles major conferences and is a huge market for ride-hailing services. If the autonomous vehicles could be successful in D.C., they should be able to perform successfully anywhere.

Ford is very concerned about the legislation and language that will govern self-driving services. If the company can learn something about managing self-driving vehicles and also be more visible to legislators while doing it, I would call that a win-win. Creating more jobs in Washington, D.C., would also go a long way toward convincing lawmakers that the technology is a benefit to all, not just the wealthier people who can afford the first self-driving models.

LG's New EV Battery Plant Is a Welcome News for Tesla
Tesla Giga Berlin's New Hurdle: It's Not Only the Gov't, but Now Tesla Itself
END_OF_DOCUMENT_TOKEN_TO_BE_REPLACED