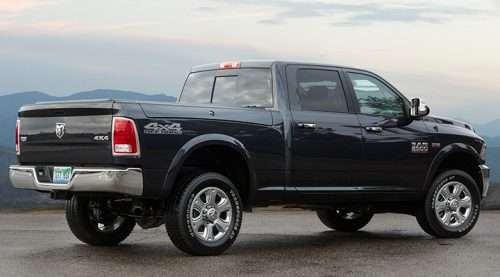 The owner of a new 2017 Ram 2500 is trying to save others a service call after his Ram appeared to be stuck in park. He is hoping his simple trick will help you, too!
Advertisement

Jason, from California, has a 2017 Ram 2500. Although he knows trucks, he had a weird experience and wants to warn others. Jason explains, “I remote started my 2017 2500, climbed in, pressed the start button, went to put it in drive and the stick wouldn't move. The "P" on the info panel flashed and that was it. Restarted several times and no change. I couldn't shift out of park.”

Jason quickly called Ram roadside assistance but thought he would keep trying. He was concerned that with the push button start the shifter would be more fragile than older vehicles. “With the remote start, I noticed that the stick wouldn't move at all and the "P" didn't flash, but when fully enabled the stick moved about 1/4" and the "P" would flash. Then it donned on me; I'd parked on a slight decline... I applied a little extra force and the damn thing shifted out of park just fine.”

Jason is not recommending that you break anything or use too much force but he says, “If you get any movement in the stick at all and the P flashes, but still can't shift out of park, man up. Your transmission probably is locked up from some external pressure and just needs a little more oomph to come out of park. Lesson learned.”

A Canadian driver, named Kela, responds “Always use your parking brake. It makes shifting out of park smooth, every time. I have to think it must save some wear on the transmission linkages as well. Not to mention, you are adding another factor of safety to avoid a roll-away situation.”

Ed, from Massachusetts, agrees. “I only use the parking brake on an incline but I do follow the practice of shift to neutral, depress parking brake, shift to park. The park pawl in the transmission appreciates it.”

RB, from Youngstown, Ohio, appreciates the warning. “Good to know. My driveway is on an incline and I always get the clunk when shifting out of park into reverse. I'll try the parking break tonight.”

Jason says he has always used his parking brake on an incline, but that the incline was so slight, in this case, he hadn’t used it. “Long story on that, but yea the short version is I should be and will be using it regularly. Didn't in this case. Wont make that mistake again, either."

It is a good warning to every driver that you should be using your parking brake, especially on an incline. The new linkages are not necessarily more fragile. While you should never use excessive force in that situation, sometimes a little push might help.