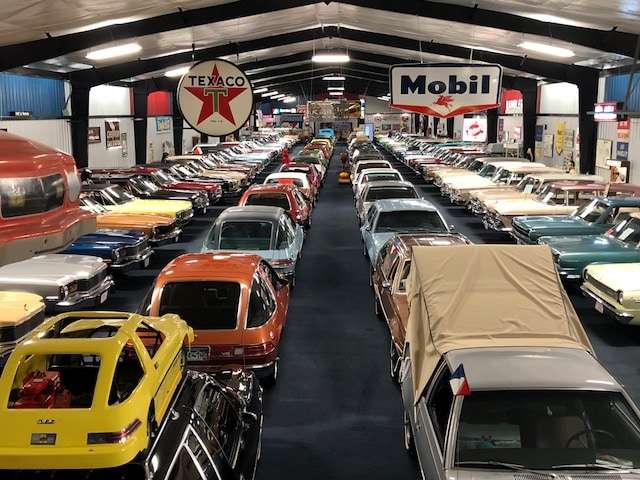 Welcome to American Motors and Rambler Heaven With 800 Pristine Examples

The Rambler Ranch is a fascinating slice of American Motors history. You will find 800 pristine examples of American Motors and Rambler vehicles. The Ranch is believed to house the largest collections of AMC vehicles in the United States.
Advertisement

Tucked away in the rolling hills south east of Denver, Colorado, sits an estate called the Rambler Ranch. Terry Gale owns the 165 acre parcel, in Elizabeth, CO, and on it he has amassed a magnificent collection of American Motors vehicles. Gale has 800 different examples of cars that comprised the American Motors line-up.

American Motors Corporation was formed in 1954 when Nash-Kelvinator Corporation and the Hudson Motor Company merged. AMC had several vehicles that were very successful like the Rambler, Gremlin and Pacer. The company also manufactured some muscle cars like the AMX and Javelin. In 1970, AMC acquired the rights to the Jeep name. AMC was eventually bought out by Chrysler in 1987.

The Rambler Ranch has six different buildings filled with vehicles and memorabilia tied to the various different eras through-out the company’s history. American Motors and its earlier companies manufactured vehicles from 1917-1988 and Gale is just seven cars short of having one model from every year.

Gale started on his journey of collecting after his brother gave him their father’s 1954 Ambassador, more than 30 years ago. In 1993, Gale moved his collection of 30 cars to a building on this site, and continued constructing more buildings to protect his growing collection. He believes this is the largest collection of AMC vehicles in the world. Gale told me that he was surprised to discover that there was not even a museum or collection of AMC vehicles in Kenosha, Wisconsin, where many of the cars were built.

While the ranch is not open to the public, Gale does open up for private tours. He told me “It’s exciting to have groups come. I love the look of surprise on people’s faces when they see all of the cars!” And it is something to see. Gale has a Kelvinator building dedicated to the refrigerators and appliances that the company once manufactured. There is a lounge that is decorated in 1960’s style.

There is also a 1960’s building that looks just like your grandmother’s or great-grandmother’s house, right down to the console black and white television and the 60’s martini shaker on the shelf.

Gale has a small gas station that doubles as an ice cream store and souvenir shop. There is an area he calls the boneyard, where vehicles are stored. The relics aren’t for sale, he uses many of them for spare parts.

Gale even has a bus that was built by the company, as well as a mail truck. There are several examples of the tiny Nash Metropolitan cars that were built in the late 50’s. He also has plenty of Ramblers and Hudsons, as well as a few Desotos, Studebakers and Packards. There is truly something for every car lover.

Although the collection is not open to the public, Gale is glad to open for tours and groups. He can be contacted at [email protected]

Parks McCants wrote on May 5, 2018 - 1:52pm Permalink
Love it! Thanks for sharing Mary. Hopefully I can visit the ranch on my next trip to Denver.
David Tjepkema wrote on May 13, 2018 - 11:35am Permalink
I worked at AMC for forty years starting five days after I was eighteen years old. I'm still traveling and hope to see your place. From what I see in the pictures you have a great collection. Great collection.
Terry Grow wrote on May 30, 2018 - 11:19pm Permalink
I was at the Rambler Ranch during the International meet in Denver, some years ago. It that time ask why you did not have a 1957 Rebel? I owned two at one time years ago,hoe you have one now. I received a letter from the Nash Healey club saying they found the 1953 Nash Healey Roadster I use to own. It is in a Museum in Evergreen Historic Society of Lebanon MO. Golfer Sam Sneed bought new in 1953. I would like to visit the Rambler Ranch again,
Ron Helderman wrote on April 26, 2019 - 3:58pm Permalink
I am the proud owner of my mother's 1963 two door American 330 station wagon. Only 3204 made. Bright red with white top. Garage full of awards and was the People;s Choice winner at the International Station Wagon Show last year. If you haven't already seen the car, it can be found many places on the internet. Planning to be indoors at the AMO show in July at St Louis. I am 86 in August and will be lookling for a home for "Mother,s Little Red Wagon" soon.
sandi wrote on August 13, 2019 - 12:36pm Permalink
Hi, I have a 1958 metropolitan rambler that I had in HS and I'm fixing it up. I'd love to come see your cars but didn't see an address on your website. is it by appointment? Sandi
Mark Hillier wrote on October 26, 2021 - 3:11am Permalink
I have a 1968 Australian assembled Rambler Javelin I am looking for a radiator support panel and a tail piece for same would need to be cut of a wreck and sent to Australia can you help at all