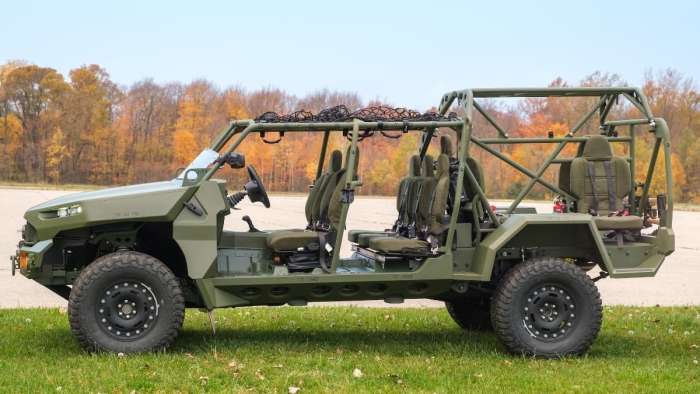 GM Defense is ramping up production of its Infantry Squad Vehicle. The new defense vehicle is based on the 2020 Chevrolet Colorado ZR2 midsize truck but it has a lot in common with race cars.
Advertisement

GM Defense is ramping up its production of its new Infantry Squad Vehicle. The subsidiary of General Motors is transforming a building it owns in Concord, North Carolina, to build the troop carrier that is based on Chevrolet’s 2020 Chevrolet Colorado ZR2 midsize truck. We have learned that the ISV military supertruck is a lot like a race car in two key ways.

The Infantry Squad Vehicle is based on the Chevrolet Colorado rather than the 2020 Chevrolet Silverado because the military needs the truck to be small enough to fit inside a CH-47 Chinook helicopter for air transportability. It also must be light enough to be to be sling loaded from a UH-60 Blackhawk helicopter. That is where the race car architecture comes in.

GM Defense is planning to build the ISV in Concord, North Carolina, because it is close to Hendrick Motorsports. Hendrick Motorsports is also a military supplier. Hendrick uses its experience developing race cars to help develop military vehicles. Much like race cars, defense vehicles must be light but heavy-duty and function in grueling conditions. Race cars can endure intense heat, high speed and high mileage all requirements for military vehicles. Hendrick Motorsports will build the chrome-moly steel exoskeleton of the Infantry Squad Vehicle frame. The frame must be strong enough to carry nine soldiers but light and agile, just like a race car.

Military vehicles, like the ISV, must be able to handle uneven, often dangerous terrain without tipping over. Stability is especially important for the troop carriers, because so many lives are at risk. Hendrick Motorsports will also provide the Roll Over Protection System for the ISVs. The Roll Over System is similar to what is used in race cars to try to keep them more stable on the track.

The 75,000-square-foot facility in North Carolina should begin delivering the military vehicles for the U.S. Army in April of 2021. This is part of a $214.3 million contract. The plant will build 649 ISVs initially and may build up to 2,065 over the next eight years.

“We have tremendous momentum behind our ISV win, featuring a first-of-its-kind tactical wheeled vehicle that gives our Soldiers speed, durability and performance to enhance mission success,” said Tim Herrick, interim president of GM Defense. “GM Defense is responsible for the design, engineering and manufacturing of the ISV. This facility will enable us to meet our customer’s timeline for delivery while continuing our journey to bring commercial technologies and transformative mobility solutions to the defense market.”

The ISV uses 90 percent proven commercial-off-the-shelf parts, including Chevrolet Performance race components. The 5,000-pound ISV is engineered to fulfill military requirements and designed to provide rapid ground mobility. The fact that it uses so many existing components means that parts should be available nearly anywhere in the world that Chevrolet vehicles are sold. Even if the parts aren’t sold there, they can be easily acquired and transported to any battleground in the world. It isn’t like decades ago where vehicles had to be abandoned because parts weren’t available or had to be specially manufactured.

According to GM Defense, “The ISV will bring world class manufacturing efficiencies, ease of maintenance and a well-established global supply chain to the U.S. Army.”

Mark wrote on December 20, 2020 - 11:18pm Permalink
"gives our Soldiers speed, durability and performance to enhance mission success" But zero armor. If Afghanistan and Iraq taught us anything it is that cave dwelling insurgents can easily rig IEDs from easily available ordnance that upends armored Humvees. This hot rod birdcage is useless in this situation. It is very effective against unarmed enemies though.