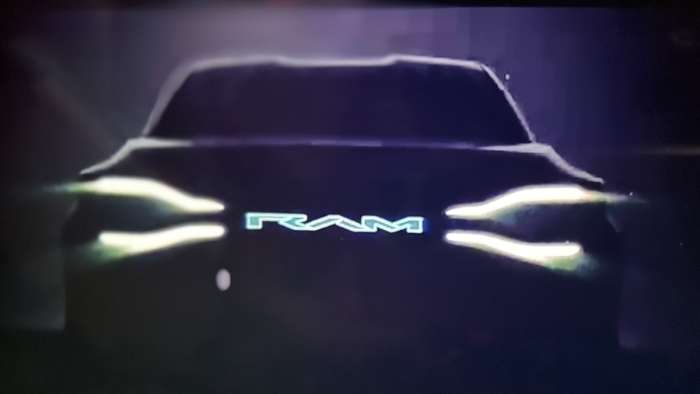 Ram admits that it is trying to steal a little of one of its competitor's thunder with the release of an all-new video of the front of the Ram 1500 EV.
Advertisement

It seems all the automakers are talking about EVs today. Chevrolet released news about an electrified Chevrolet Corvette, yesterday. The Ford Lightning EV pickup is starting production today. Ram has confirmed that a future electric version of its popular Ram 1500 pickup is coming and it released a tweet teasing big news, along with a video.

The tease video includes lightning and thunder special effects and then the front of the Ram appears. It is titled “Ram Revolution First Look” which appears to confirm that will be the name of the new pickup. Ram established an insider’s group and page for the Ram Revolution inviting fans to join them on the journey to the pickup’s electrification. The tease also says the Ram Revolution will be unleashing in the fall of 2022. The CEO of Stellantis has promised that there will be a Ram 1500 BEV by 2024. The tweet suggests we may see the concept truck debut later this year.

Stellantis released new sketches of the Ram 1500 BEV concept in early March, but few details have been confirmed. Stellantis CEO Carlos Tavares promised during his corporate presentation about accelerating EV production, in March, that the Ram BEV would excel in every category. Tavares introduced the sketches of the Ram 1500 electric truck saying “The Ram 1500 BEV will enter the hot pickup market in 2024. According to our Internal Performance Index, our Ram 1500 will outperform our competitors on the attributes our customers care most about: range, towing, payload, charge time. Really thrilling!”

Ram BEV Confirmed During EV Day in July of 2021

When the electric Ram was outlined during EV day, in July of 2021, Chief Design Officer Ralph Gilles said the Ram 1500 battery electric truck will be built on the STLA Frame platform. There are four STLA platforms, Frame will provide the underpinnings for the body on frame vehicles like large SUVs and the Ram trucks. STLA is pronounced Stella, and the different sizes correspond to the size of the batteries. The Frame size battery should be 159-200 kilowatt hours and provide up to 500 miles of range.

Gilles said that the battery will sit “nice and low” in the truck and the Electric Drive Modules or EDMs will be on toward the outside of the vehicle, allowing the designers greater versatility in creating “very-attractive designs”. Gilles said Ram will “Redefine what the full-size truck looks like and also how it works.”

Now, we have an indication that we will learn much more about the truck this fall. Detroit just announced plans for its revived North American International Auto Show in September. That would be a perfect time for the Ram Revolution to gain worldwide attention.

Photo is Screenshot of Ram Video