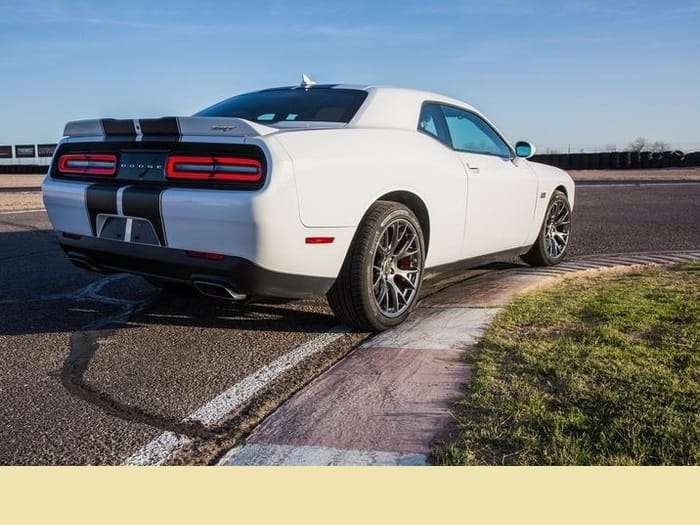 Racing a 2017 Dodge Challenger could void your warranty

The owner of a 2017 Dodge Challenger was stunned to discover that racing his high horsepower vehicle can void his factory warranty.
Advertisement

The racing issue was raised on a Dodge Challenger forum, by Caleb, who has a 2017 Dodge Challenger. Caleb says, “I live near the Portland International Raceway and some guy told me that taking your car to the track will void the warranty. While I was closing out my recent issue with DodgeCares, I asked her if this was true. She put me on a brief hold and spoke with another department there and stated that it won't necessarily void the warranty, but if there's direct damage caused by racing, it won't be covered, which makes sense...she said there's more information on the Mopar website, which this is mentioned in the warranty.”

Steve, from Tennessee, says it boils down to what caused the damage. “If you track your car and your radio quits working they're going to cover it. Break an axle though and you're footing that bill.”

Dean, from Utah, says there is an even bigger issue. “Perhaps more importantly, most insurance policies won't cover any injury or damage that occurs while participating in racing/speed contest.” Now, that could hurt.

An owner from Colorado suggests that you don’t have to tell the dealership exactly what happened. “Have it towed to the dealership by a company of your choice. Who's going to know where it happened (assuming it's not in a wreck).” That isn’t a great idea. It overlooks the onboard black box that the dealership can check to see the speeds and RPMs that the car was experiencing right before the failure.

Modifications may Void your Warranty

Slid, from Louisiana, says that as long as the car hasn’t been altered, the warranty may still cover you. “Keeping your car 100% stock goes a long way to keeping your warranty even on the track. I know it says in the Owner’s Manual that racing voids your warranty but a track day or a trip down the drag strip is not necessarily racing. The Demon retains its full warranty even on the strip, provided you keep it stock or with the crate parts. Why would it be the only Dodge to enjoy this benefit? Many Hellcat owners got driveshafts replaced under warranty and it's pretty obvious that 99% of them failed on the track and some with drag radials and slicks, yet FCA repaired the cars anyway.”

There is some public relations value for Dodge to keep the Challengers race ready for high performance fans, but I believe virtually every car manufacturer voids warranties, unless the vehicle was sold specifically as track capable like the Camaro and Mustangs with the track packages.

A Mopar vendor puts his warning very plainly. Steve says “If you race on a race track and you break something don't expect FCA, Ford or GM to pay for it.....It’s not their responsibility, so if you’re worried about your warranty don't mod or compete, it’s that simple. P.S. to further that, when I was with another manufacturer, they actively went to race tracks, favorite mud holes, where off roaders compete, etc. and documented vehicle and restricted warranty.....we had several customers find that out the hard way.” It is not uncommon for manufacturer’s reps to go to tracks and write down vin numbers. In those situations, warranties on drive trains, engines, transmissions and axles may be restricted.

Steve, from Tennessee, races back in and says, “A pass or two at the track is one thing but where do you draw the line? Is it 10 passes? It's hard to draw that line once you say some racing is ok. I see their point on this and trust me nobody would like to see everything covered more than me. But the fact is these are production cars designed for daily driving and to be sporty. They aren't designed for multiple launches at a track or the hard Gs in a corner at a track. Even race cars that are purposely built by well-paid engineers break on the track so it would be silly to think any manufacturer could/would/should cover an assembly line car.”

Several of the owners point out that the owner’s manual does mention how to handle the Challenger at “Track Events”. Steeler, from Virginia, says they forget about the disclaimer that is also written in the owner’s manual. “In each section where the manual talks about how to operate the car at the track is this "NOTE: Due to the extreme conditions encountered during track use, any damage or wear associated with track use is not covered by the manufacturer's warranty". So, in effect, the manufacturer absolves itself, saying that you can go to the track, but we won’t cover it.

Several of the Challenger owners say the key to this issue is common sense. “The guy or gal that goes to the track once a year is one thing, but the ones that track every week, is totally different.” Racing is an expensive sport and you have to expect to pay if you are going to play.

Richard wrote on February 6, 2018 - 3:02pm Permalink
"Void your warranty" is such a misnomer. Nothing really "voids" your warranty. You can have claims denied for specific reasons, though. But nothing you do is going to have the dealership or manufacturer just say, "that's it, we're out." But any insurance policy (and that would be a much better term for a warranty) is like that. If you cause the problem, you don't get paid for it. Burn your house down with matches? You probably won't be reimbursed. Put a lift kit on your truck and then bring it in because the CV joints are prematurely worn? Nope. It'll be denied. But on the same truck, if you had an issue with the wiper motor, that'd still be covered. If you're racing your Challenger, but the car stereo stops working - that'll almost definitely be covered. It's all situational.