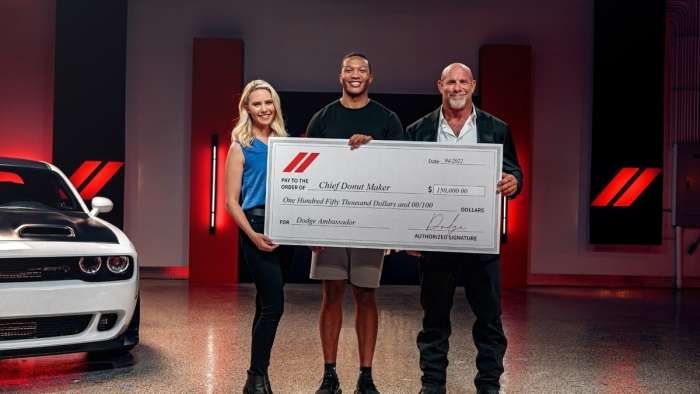 After a four month competition and 173,000 entries, a North Carolina man is the lucky winner.
Advertisement

Dodge now has a new brand ambassador, and you can expect to see him at major automotive events over the next year. Preston Patterson, of Charlotte, North Carolina, is Dodge’s new Chief Donut Maker. The title refers to a muscle car’s ability to do donuts because of its high horsepower. Patterson will be given the use of a 2022 Dodge Challenger SRT Hellcat and receive a salary of $150,000 during his year-long tenure. He doesn’t even have to quit his day job. He says he works in the Compliance-Legal field.

Dodge conducted a four-month Chief Donut Maker contest, receiving more than 173,000 entries. The contestants were whittled down to ten and then competed in reality show-types of challenges. Dodge held the contest as part of its two-year Never Lift campaign as it transitions the brand toward electrified versions of muscle cars. The selection process and the challenges were chronicled in three different webisodes hosted by wrestler and Dodge fan Bill Goldberg and sportscaster Katie Osborne.

“After a nearly four-month search for our chief donut maker, we were blown away by our 10 finalists, and how each uniquely embodied the very best of the Dodge brand,” said Dodge CEO Tim Kuniskis. “We put our candidates to the test both on and off the track and Preston never lifted, proving that he possesses the knowledge, character and drive to represent the Brotherhood of Muscle.”

“To go from a kid who had a poster of a Dodge Viper on my bedroom wall to being handed the keys to a Dodge Challenger Hellcat as my company car is beyond my wildest dreams,” said Patterson. “I’m 100% ready for my first assignment as chief donut maker, and I’m looking forward to representing Dodge and the Brotherhood of Muscle at some epic automotive events in this next year, especially Roadkill Nights this summer.”

During a question-and-answer session after the announcement, I asked Patterson what he wanted his two children to learn from watching him compete in the contest. Patterson says he wants them to see that “there are no barriers in life.” He says he wants them “to work everyday and never lose sight of your goal.”

Patterson is also interested in spreading Dodge’s message to the younger generation. He says he would like to show the Dodge cars to children in elementary schools, take the vehicles to Children’s Hospital and into underserved communities. He wants to show young people that being interested in cars “is a brotherhood that we can all be a part of.”

Dodge CEO Tim Kuniskis says they were very impressed by many of the people they encountered during this contest and we may see some of the competitors again as Dodge continues its 24-month calendar toward electrification.

Kuniskis knows that it may be difficult to sell muscle car fanatics on the idea of electric muscle cars. Even Patterson may be skeptical of some of Dodge’s ideas. Kuniskis says that is part of reason the judges chose Patterson. Kuniskis suggested that Dodge doesn’t need a talking head or yes-man in this role. Patterson became frustrated with a Dodge scat-pak that he had owned previously. He posted comments that were critical of his previous car’s performance. He then bought a Porsche but returned to the Dodge fold because he missed the Dodge community. The brand wants someone who really is a member of the “Brotherhood of Muscle”. Kuniskis says If they can convince Preston Patterson that the electric muscle car can really perform, his message to fans may carry more credibility.

Look for Preston Patterson and his brand new black 2022 Dodge Challenger SRT Hellcat at all sorts of automotive events, including the 2022 Woodward Dream Cruise and Roadkill Nights, in the Detroit area, in August.

Harlin Dalton III wrote on April 27, 2022 - 9:51am Permalink
What a joke. If this Mopar Imposter shows up at any of the MSHS events, he will be laughed off the lot. Tim Kuniskis, you are a very level headed guy and I have been impressed with you and your actions - now, not so much.

Tesla Contemplates A New Strategy for China Retail even As Sales Boom
Jay Leno on Elon Musk & EVs: “I Think He Should Get ... Credit"
END_OF_DOCUMENT_TOKEN_TO_BE_REPLACED