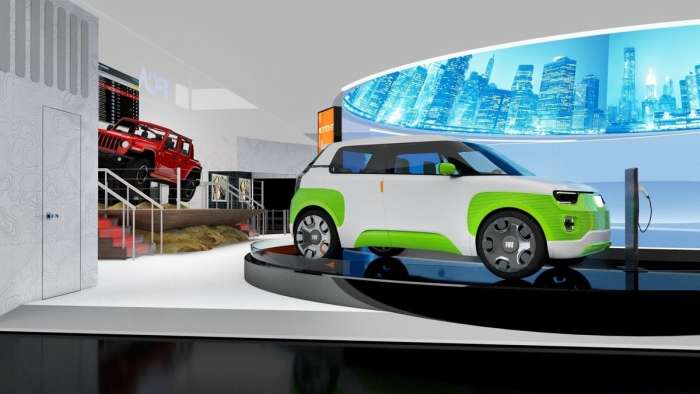 Jeep is planning to release more information at the Consumer Electronics Show about its plans to electrify some of its Jeep vehicles under the Jeep 4xe banner.
Advertisement

Fiat Chrysler has come under scrutiny for lagging behind other companies in the push for electrification. We should hear more about the automaker’s plans to spark innovation in the Jeep brand when it shows three hybrid Jeep vehicles at the 2020 CES show, in Las Vegas. The CES show runs January 7-10, 2020. Jeep will be showing plug-in hybrid versions of three popular models, the Jeep Wrangler, Jeep Compass and the Jeep Renegade.

The Consumer Electronics Show has grown every year and is one of the main reasons that Detroit is moving its North American International Auto Show to June to avoid competing with the world class show. The show features developments in technology. In the past, many of the automakers have used the show to feature innovations in connectivity, audio, navigation and autonomous vehicles.

Fiat Chrysler announced today that all of its Jeep brand electric vehicles will now carry the Jeep 4xe badge, signifying that the vehicles are electric but also still 4x4s.

Jeep plans to show plug-in hybrid versions of its incredibly popular Jeep Wrangler, as well as its smaller Jeep Renegade and Compass models. The Renegade and Compass 4xe vehicles were shown at the Geneva Auto Show in 2019. Jeep says the hybrid vehicles will be available at some point in 2020. FCA is also promising that all of its Jeep vehicles will offer electric options by 2022. FCA is promising that it will offer 30 different electrified nameplates globally by 2022. FCA has said previously that not all electrified vehicles will be released in all of its global markets, some may be released only in Europe, China or North America.

In a release outlining its CES plans, FCA says that electrification “will modernize the Jeep brand as it strives to become the leader in “green” eco-friendly premium technology. Jeep electric vehicles will be the most efficient and responsible Jeep vehicles ever, providing absolute and quiet open-air freedom while taking performance, 4x4 capability and driver confidence to the next level. With greater torque and immediate engine response, Jeep electric vehicles will offer an even more fun-to-drive experience on the road and more capability than ever off the road.”

Chrysler has had success with its Chrysler Pacifica hybrid minivan. I have had the chance to drive it and it performs very well. Ram has also had great reviews on its eTorque mild hybrid system improving its engine performance. While FCA may not be the frontrunner in electrification, it has been quietly experimenting with options.

Jeep intends to highlight its commitment to electrification at CES by offering a virtual reality experience. The simulator will allow the person to experience an off-road ride through Moab’s “Hell’s Revenge”. The participant can sit in the Jeep Wrangler 4xe and take a virtual trip through the famous Utah trails. It will give the person the driver’s point of view while driving. Much like a ride at Disney or Universal, the Jeep Wrangler Rubicon is positioned on hydraulics and the virtual reality tour is timed to correspond to exactly what is experienced on the Hell’s Revenge trail.

Jeep is planning to release more information about the Jeep Wrangler 4xe, Compass 4xe and Renegade 4xe at the Geneva, New York and Beijing auto shows. Geneva is obviously aimed at the European markets. The China market is important to all of the automakers. The New York show has historically been where the auto companies prove to Wall Street that they are making financially sound decisions for the future.

DeanMcManis wrote on January 4, 2020 - 1:35am Permalink
It is good to see Chrysler commit to electrification. Until now the only real green vehicle that Chrysler built was the Pacifica PHEV. Fiat offered a couple compliance cars, but they had no real plan to support EVs. They should have extended the Pacifica’s hybrid drivetrain across many models several years ago. For these new PHEVs I am unsure if they will reuse existing EV technology, or if Chrysler has engineered a new EV drivetrain to fit in these new PHEVs. I don’t think that mild hybrid technology is any real EV commitment, but it is great to see Chrysler finally working to be competitive in terms of fuel economy, as they have been previously only working to compete in terms of performance.

Toyota's First EV Will Have a Name of BZ: Toyota BZ
First Videos From Inside The Boring Company's Las Vegas Loop
END_OF_DOCUMENT_TOKEN_TO_BE_REPLACED