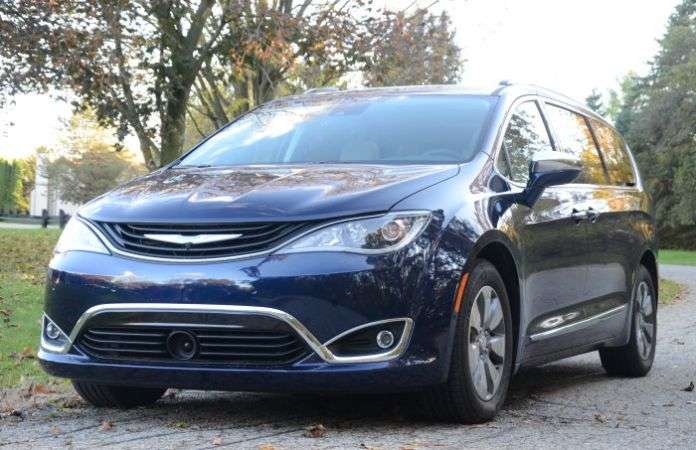 The 2017 Chrysler Pacifica Hybrid is a super-efficient minivan for the daily drive, but I found that this electrified people mover also serves as a great vehicle for a long family road trip, averaging nearly 30mpg over the course of a 300-mile drive.
Advertisement

The Chrysler Pacifica Hybrid is the first minivan to offer all-electric driving capabilities and in an area without many big hills (like Metro Detroit), I found that you can make a 40-mile daily commute running just on battery power while only charging overnight at home. In addition to the electric drive, the Pacifica Hybrid has a gasoline engine that allows for unlimited driving while also charging the batteries. This means that once your electric-driving range is fully depleted, the vehicle will still go into all-electric mode for short periods as the batteries gain juice from the engine and the regenerative braking system. Because of this perpetual charging system, this hybrid minivan offers significantly greater fuel economy capabilities for the average daily drive than any other minivan on sale today.

However, EVs and hybrid vehicles are often slighted as only being ideal for the local trip, so when my family planned a road trip from our home in Michigan to Cedar Point in Ohio, I lined up a 2017 Chrysler Pacifica Hybrid to see how the most efficient minivan for the daily drive handled a lengthy road trip.

The Daily Drive
Around town, the 2017 Chrysler Pacifica Hybrid is a great-driving minivan. The electric drive system provides tons of low end grunt, allowing the vehicle to accelerate quickly and smoothly. Really, other than the fact that the Hybrid is often moving without the gasoline engine running, this model drives as well as the non-hybrid version. I called the “regular” Pacifica the best-driving minivan on the market and Hybrid is nearly as nice to drive in every way. The Pacifica Hybrid really only comes loaded with all of the premium features that you could want, including heated (and cooled) leather front seats, a heated steering wheel, second row bucket seats and a third-row seat that easily folds into the floor for extra cargo space. The newest premium UConnect infotainment system is mounted up front with the duel screens of the UConnect Theater for the second-row seats, with charging ports for everyone located throughout the cabin.

Gadgets aside, the Pacifica Hybrid has more than enough room in every dimension for passengers of above-average height in the front two rows, while the third row will accommodate most adults and any kids. I have been in the back row of a few packed Pacifica minivans and the third row offers a comfortable amount of leg room, so this is a legitimate option for hauling six adults. Ultimately, the Chrysler Pacifica Hybrid doesn’t require you to compromise on any of the aspects that make the non-hybrid such a great minivan, so if you like the interior layout and the driving dynamics of the vehicle – but you want EV driving capabilities and superior fuel economy numbers – this Hybrid package is a fantastic option. If you need a roomy vehicle for a daily commute in the range of 40-50 miles, this might be the perfect daily driver for you.

The Drive to Cedar Point
Our trip to Cedar Point began with some early morning errands with the Pacifica Hybrid and during that time, I unfortunately ran the batteries down to the point that we would be making almost the entire 150-mile drive to Ohio with the electric range at 0. This gave me a chance to see just how good the fuel economy numbers are when driving outside of the all-electric mode. Almost the entire drive from Michigan to Ohio was on the highway, with the cruise control set in the range of 70-75 miles per hour. During this early highway portion of the drive, the Pacifica Hybrid hovered just about the 30-mpg mark, which is impressive for a vehicle of this size with four people, a cooler and some random items needed for a day at the amusement park. In addition to getting great mileage, the Chrysler Pacifica Hybrid offered a smooth, quiet ride on the rough Detroit area highways, allowing some of the passengers to sleep while I enjoyed the satellite radio and premium sound system from the driver’s seat. Meanwhile, when the kids werent sleeping, the incredible UConnect theater system, with two large screens mounted on the back of the front seats, dedicated headphones and a large collection of apps, kept them occupied throughout the course of the drive. I didn’t hear “are we there yet” once – not even when sitting in dense traffic. If you have never been to Cedar Point, it is an amusement park situated in Sandusky, Ohio, on a narrow strip of land with just two small roads leading on and off of the fun-filled island. Our trip with the Chrysler Pacifica Hybrid came during “Halloweekends”, so the park was packed and traffic was an absolute nightmare. The final two miles of our drive to Cedar Point literally took two hours, with thousands of people heading to the park on one of the final days of the season.

Of course, we were completely out of electric range when we hit that brutal gridlock, with the battery range gauge reading 0, but as we crept through traffic, the majority of that driving was with the gasoline engine running. There were a few times where the engine fired up, but it would only run for a short time and then we were back on battery power. By the time that we finally got to the parking lot, we had averaged 28.9 miles per gallon on the 150-mile drive from Michigan to Ohio. After many, many hours fighting the crowd and long lines, we headed home shortly before the park ended and fortunately, the traffic was nowhere near as bad leaving. The entire drive home proved to be fairly smooth sailing and when we returned home late that night, we had averaged 29.9 miles per gallon for the course of the 300-mile trip and we still had a little less than a half-tank of gasoline left.

The Final Word
If you want the best-driving, highest-tech minivan on the market, the Chrysler Pacifica is your best option, but if you want those great driving dynamics, the interior technology, upwards of 40 miles of real-world all-electric driving and the ability to get up around 30mpg on a long highway drive – the Pacifica Hybrid is worth every cent. With a starting MSRP of $44,995, the Pacifica Hybrid has one of the bigger price tags in the segment, but when you consider all of the features which aren’t available from the competition – highlighted by the electric drive system – this really is the most capable minivan on the market in every way.

If you are in the market for a new minivan and fuel economy is your concern, while still wanting plenty of premium features, make sure that you drive a Chrysler Pacifica Hybrid before making your next purchase. I expect that most shoppers will agree with me on every front.