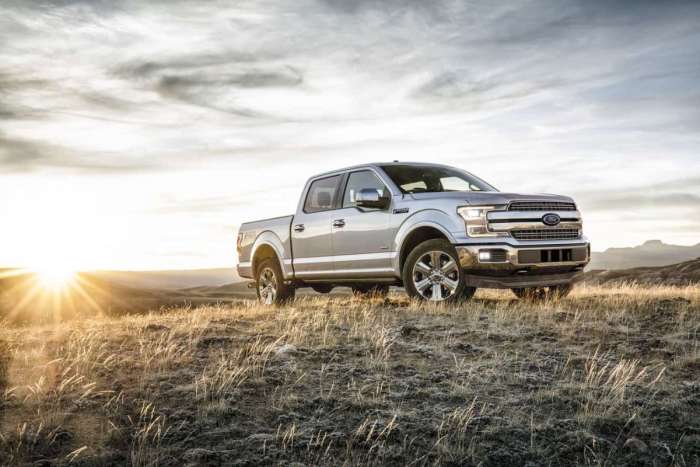 Ford is already struggling to cut costs while investing in new vehicles and it is forced to spend millions to recall its most popular vehicle.
Advertisement

Ford is recalling about 2 million 2015-18 Ford F-150 Regular Cab and SuperCrew Cab trucks in North America for driver and front passenger seat belt pretensioners. Investigators discovered that the mechanism that tightens seat belts can give off sparks and potentially ignite fires. The pretensioners were built by Takata, a company already under fire for producing dangerous air bags.

The F-150 has been the best-selling vehicle in the United States for decades. Ford has recently discontinued production on most of its sedans to focus on building more trucks, SUVs and crossovers. It will cost Ford millions to bring the two million trucks in and have the service departments fix the defective parts.

According to Ford, “Some front seat belt pretensioners can generate excessive sparks when they deploy. When sufficient sparks are present, gases exhausted inside the lower portion of the B-pillar by the pretensioners may ignite. If this gas ignites, components behind the B-pillar such as insulation and carpet may subsequently catch fire.”

Ford is aware of 17 reports of smoke or fire in the United States and six in Canada. Ford is not aware of any accidents or injuries as a result of this defect.

When it was announced that the National Highway Traffic Safety Administration was going to investigate the seat belt fires, TorqueNews managing editor Patrick Rall described the problem this way: “The NHTSA received five complaints from owners of 2015-2018 Ford F-150 pickups claiming that a fire broke out in the area of the interior where the pillar between the front and rear doors meets the floor. In three of those complaints, the truck burned to a total loss while in the other two incidences, the fire went out on its own.

The most elaborate report came from someone who had a deer run into the side of the truck while the F-150 was in motion, doing minor damage. The animal hit the truck hard enough that it set off the side impact airbags, forcing the driver to pull off the road. After the truck had been sitting for 5-10 minutes, the driver noticed smoke coming from the base of the b-pillar and a few minutes later, the Ford truck was engulfed in flames – leading to a total loss.”

The recall affects approximately 1,995,776 vehicles in North America. There are 1,619,112 of the trucks in the United States and its federalized territories. There are another 339,884 in Canada and 36,780 in Mexico. The Ford reference number for this recall is 18S27.

How Dealers Will Fix the Problem

Dealers will remove insulation material from the B-pillar trim, remove remnants of wiring harness tape in the B-pillar area, and apply heat-resistant tape to the carpet and its insulation. Dealers also will modify the back interior panels of Regular Cab vehicles. All repairs will be provided at no cost to customers.

LG's New EV Battery Plant Is a Welcome News for Tesla
Tesla Giga Berlin's New Hurdle: It's Not Only the Gov't, but Now Tesla Itself
END_OF_DOCUMENT_TOKEN_TO_BE_REPLACED