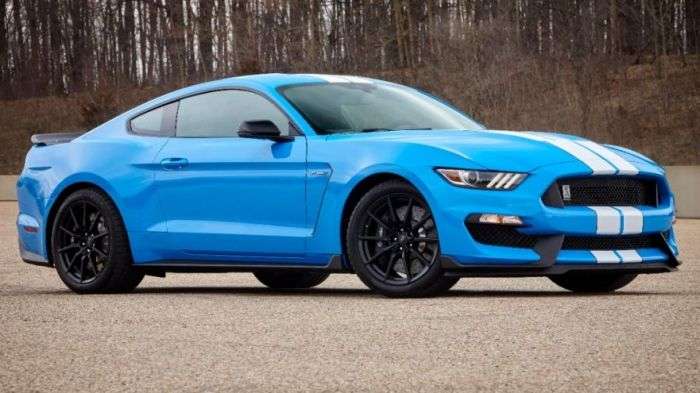 Ford has issued a technical service bulletin about having the gap fixed where the rear bumper meets the quarter panels on some 2015-2018 Ford Mustang GT350s. Some owners are concerned that the work could make the problem worse.
Advertisement

Ford has a hit with the popular Mustang. The original pony car is one of the few car models that the automaker plans to keep as it moves forward. Recently, Ford issued a technical service bulletin to fix gaps where the back bumpers meet the quarter panels on some 2015-2018 Ford Mustang GT350s. The TSB is 18-2107 and it applies to 2015-2018 Ford Mustang GT350s built on or before February 25th, 2018.

The service bulletin calls for the service techs to remove the back bumper, replace the side and outer rear brackets and add compression wedges, before reattaching the rear bumper. Some of the work involves drilling new holes for the brackets.

Even though the work would be covered under warranty, some owners of the GT350s are reluctant to let anyone remove their back bumper unless it is absolutely necessary, for fear it could make the gap worse!

On one popular forum, John says even his dealer is concerned about doing the work on his 2017 GT350. “Even though you can see some of the tab on my Shelby, my dealership service department said as many things involved with the TSB they wouldn't touch it or have their body shop they use do mine either. You’re talking drilling, screws, rivet cutting with scissors trimming some of tab off etc. You would have thought Ford would have came up with a simple fix of complete different style brackets that would pull it up snug. My understanding is the new brackets in the fix it kit are basically same as ones already on car.”

Drum has a 2016 GT350R or track package. He says he will wait to see if his own fix works before letting anyone take off his bumper. “If you take the bumper cover off the car, you will see the problem isn’t the brackets but merely how they’re attached to the car. This is reinforced by the concept that 95% mustangs leave the factor with decent panel gaps that deteriorate over time. The hardware simply comes loose. The screws in my brackets were loose and not even finger tight. Since, I’ve added a lock washer under the screws at pivotal points (at least three to each side) and we shall see if they can help prevent the screws from backing out. I’d much rather take this chance than the one in the TSB.”

Patio, from Chicago, also has a 2016 Mustang GT350. He was impressed with what he witnessed as his local dealer. “Just left my local dealer's body shop for another issue (broken emblem). I know a few guys in the body shop. He showed me a new car he just completed this TSB. I Must say it actually looked perfect. I know a lot of guys don't want the dealer doing anything to their cars but in my case they have always done good work. I might have this done.”

Shift, from California, says he plans to wait to see if the TSB work really fixes the problem. “Even my service writer was skeptical of its effectiveness. I'm going to wait until the last minute before I do this TSB. I don't want to do permanent modifications to the bumper and later on find out it still doesn't fix the problem.”

VooDoo is making plans to have the work done. He says the gap on his car is sizeable and growing. “My dealer ordered the kit for me...they will farm out the work to a local body shop (provided they will accept the compensation, 1.7 hrs if I recall)...I’ve noticed the gap increase just over this winter. I can’t see it improving!”

GT350 says he is going to go ahead with the work on his 2016. “I am going to roll the dice on this one and will let you guys know how it turns out. Dealer is taking the car to the body shop they use this morning to follow the tsb using the ford kit.”

GT350 is very pleased with how the repair work turned out. “Just picked up my car after having the bumper gap TSB repair done. It is way better than I was expecting. The panels are in perfect alignment and the gap is now too small to even fit my fingernail in. First one the bodyshop my dealer uses has done so I was pretty nervous. The TSB says 1.7 hrs using 2 people at times. It actually took them 4 hours using 4 people for the last 2 hrs. I guess now I just gotta keep an eye on it and see if it lasts!!”

Drum says he is hoping that this fix is successful and permanent. “Time will tell the fate of the TSB... my hope is that it is a genuine fix. I know I personally don’t want to have to take my fascia off again to “tighten up” the gaps.”

This is one of those situations where truly only time will tell if it solves the problem permanently. Ford has issued the TSB outlining what it will do to solve the problem and it will be footing the bill. Hopefully, the automaker has this absolutely correct.

Alex "VOODUE" wrote on February 27, 2019 - 9:59am Permalink
I have a "Deep Impact Blue", 2016 Shelby GT350. This Technical Service Bulletin (TSB) has been weighing on the back of my mind for some time now, lingering like a Dark Cloud! What a mental battle, weather to have this TSB accomplished. This is mainly due to the scope of work need to be accomplished, having to "DRILL" into the original sheet metal does not sit well with me! In any event, I bit the "Bullet" (HAHA!) and took my Shelby GT350 to my local Dealerships' Body Shop yesterday. After great deliberation, the TSB will be accomplished . I'm take this opportunity one step further to have the lower portion of the rear valance (which is very heavy) replaced with a "Carbon Fiber" replacement. I will have to burden the cost on this upgrade of course. That said, please, if anyone has already done so, recommendations on which manufacture to use or willing to sponsor are welcome? I believe the weight deference will help alleviate some of the stressors which may be a contributing factor I'm sure. Then again, in addition, is the design of the "Rear Air Deflector Pan" with the two "Air Channels" exacerbating this problem? I would think this is also pulling down the rear valance compromising the mounting points which in turn is creating the separation / gapping problems. I believe the "Rear Air Deflector Pan" was engineered for additional down force and is attached to the rear valance so it only makes sense?? I wonder if Ford has even bothered to re-engineer this issue in some way to prevent this from reoccurring on the 2019's, I would hope so? To be honest I would be inclined to trade up for a 2019 just for this very reason however, the 2019's would have to come in "Deep Impact Blue" other wise, it's a deal breaker for me! Well, we shall see what occurs, updates to follow.